Hadzabe: “We live in the present and only worry about today and maybe about tomorrow.”

Via an unpaved path along the shores of Lake Eyasi, in the shadow of the Ngorongoro Crater, we went on an adventure and research in Tanzania. Here on the outskirts of civilization in East Africa, the Hadzabe live a modest existence as hunter-gatherers. Although modernization within the African continent has continued to advance and the decline of natural corridors between National Parks have undoubtedly already had an effect, the lifestyle of Hadzabe still accurately reflects how humanity has lived 90% of its history. Surviving in the Great Rift Valley; the Hadzabe are the latest flashback to what society has looked like at the cradle of our existence.

Click Language versus Hints and Pictionary
Already after the first day at Shakwa’s family, our team speaks click language almost fluently. Our hints and pictionary are also making enormous progress, because even though we have our guide Yousef, expressing yourself and having a conversation is a challenge. We’ll have a few new team members in no time. James, the driver, is also very interested and wants to know and learn everything about the Hadzabe tribe. Normally, he makes a short stop on the side of the road when they’re on their way to Serengeti. However, he admits, he actually doesn’t know much about the Hadzabe at all. Despite the fact they are one of the 120 tribes that live here in Tanzania. We also give him a camera and a crash course in photography. James is very happy with taking pictures and learning everything about his own countrymen. Angatley, a beautiful man of 5/6 years old (we estimate, because he is changing his teeth), turned out to be the new Steven Spielberg within half an hour and went wild with the GoPro! He filmed everything from the behind the scenes perspective.

Baboon on a bed of berries
As the day progresses, we learn more and more things. The children take us to the big rock and show us all kinds of edible things along the way. They must really laugh at our woody climbing abilities while they frolic on the rocks like true goats. The favorite local dish is freshly shot baboon, pieces of ground roots roasted on the campfire, garnished with orange and white berries for the color palette. At dusk we drive back to our tented camp and discuss the first impressions. Perhaps what was most special, was that we felt incredibly welcome. We were warmly welcomed with open arms and the Hadzabe allowed us to be part of their family, culture and rituals.

Hunting with the Hadzabe and Bees in the Baobab
The alarm goes off again at 4 o’clock, because we can go on the road with the hunters. We spent the whole morning running, chasing, tripping and clambering behind the hunters. We often lost them, because we were completely stuck in a barbed bush or suddenly they ran off chasing a beast… And well… there you are in hyena land armed with a camera and in the grip of an acacia bush. Completely scratched and with a torn shirt, we pick ourselves through the thorns and wait for a redeeming whistle of a Hadzabe, which is the direction indicator for a new series of shrub diving. A dwarf owl was hit first and strung on an arrow with 1 precision shot. Even before we arrived at the crime scene. While sweat dripped in our underpants from the last sprint, the owl was relieved of his suffering by crushing his spinal cord with a bite in the neck. A bushbaby and a bird also suffered today. Then, the men gave a crash course in bush BBQ. The owl is honestly divided into pieces and pelted up. We also had culinary honey tasting at the foot of a large Baobab. The bee population was first smoked a little, after which the dripping honey was recommended for grabs.

Bush Food Expedition
Today is ladies day. In the early morning, we went on a bush food expedition with the Hadzabe ladies. The little kids also went on an adventure. It was a bit like a SAS survival course. The ladies made it clear to us what is and what’s not edible by using hand gestures. You die from the red berries from the plant of which poison is made and used for the arrows, so “a don’t touch policy”. They can’t get enough of the orange berries that make your tongue paralyzed. We also taste them, after which we no longer feel our tongue for half an hour. The kids clamber in the tree skillfully, and let the branches bend through so that the women can easily plunder the half tree, fill their pans and stuff the rest into their mouths. White berries must first be squeezed, the contents sucked out and the kernel spit or swallowed as a whole, because it is bitter. Next on the schedule is kind of advanced foodie search. The clumps are carefully examined to find a kind of parasite plant in which the wires grow into the tree. It looks like a kind of ignition wire or wick. With the help of sticks, the soil is technically stirred, stones removed and the roots, which look like sweet potatoes washed out of the balls, are picked from the ground. It almost went wrong … a poisonous ambush …. a scorpion! He is fished out of the pit by his tail and hurled to the next grove. Satisfied with the loot, we return to the hut. 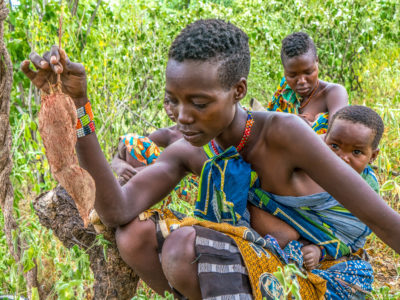 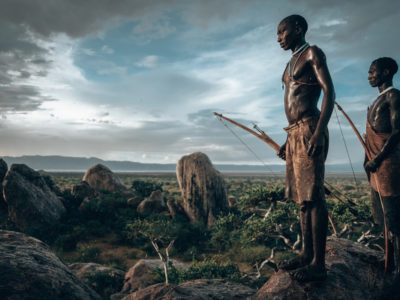 Mother, Powerwoman and Bush Babe
Then to the river, which unfortunately is currently an empty sand bed. But don’t worry … in no time they dig to a depth where the groundwater comes to the surface. All buckets are filled to the brim after the big filter magic trick by pouring it over a few times. The buckets are not to be lifted …. for us then … with one hand you push it around your head, neck straight and lugging but at 37 * C … we spontaneously get a hernia or whiplash only by looking at it. Food ladies have a full-time job. Oh, right, their babies indeed have been on their backs all day. Mother, power woman and bush survival babe in one, we Western women are a wimp.

The men took a nap after the morning hunt in the shade of the tree. All boys are called, because they are taught by the dads how to make your own bow and arrows. Carefully, they go looking for a good branch as big as yourself, which can be used as a wooden frame. The little boys are also given a nice branch. With their teeth, they make the branch completely straight. They tighten the bow with string. Shorter and thinner branches are also collected and taken back to the camp. The bark is stripped off, the inside of the branch warms in the fire and treated with the teeth. The shaft of the arrow is made level with great precision, because yes, an arrow that swings off is of no use to you. The arrowheads attached to it with a kind of tar and rope. Then, the feathers of the shot owl reappear and attached to the back. The springs ensure that the arrow point as it flies keeps pointing forward and has balance in the air. Of course, the new acquisition must also be tested. The notebook is the target and pierced with a precision shot. We can also give it a try. Tensioning the bow alone is a challenge, let alone getting the arrow in the right direction to the great hilarity of the boys who are rolling on the floor of laughter. Even the smallest villain of 4 shoots a grasshopper out of the grass without hesitation. 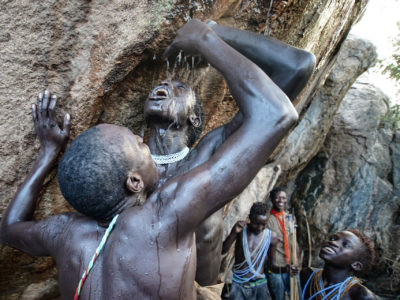 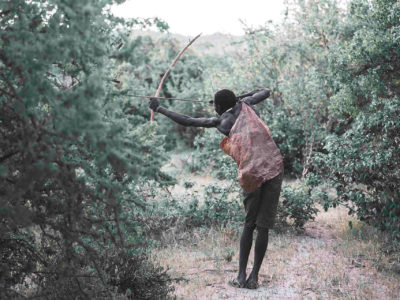 Interview
On the last day we interview chief Shakwa, N’Oye and Haydi-e’ (Shakwa’s mum), who proudly talk about their cultural heritage, (survival) and their families. Their challenges, dreams and the future. With a big smile, they all tell us the same thing. They describe the people who live in the village as “lost”, they no longer know how to take care of themselves and are dependent on others. They said … “We live in the present and only worry about today and maybe tomorrow.”

Singing in the Rain
It feels like we have an extra family. We take some beautiful pictures of these special people, who have captured a piece of our heart. Together we climb the rocks behind the village for a group photo. A green mamba is shot off the road, because they don’t like fatal accidents. When the men and boys stand on top of the rock for a magical photo with the Ngorongoro crater in the background, the sky bursts open. They are completely happy, because now you can take a nice shower and get rid of all the dust. While singing and dancing, they take us to the small cave and we can watch this exceptional joy.

Still, it became even more beautiful. Back home everyone takes branches and grass for an evening by the campfire. There we are, under our 5 million star-hotel, at a crackling fire and the storytelling evening can begin. With great eyes, the kids look at the hunters, who tell exciting stories about the hunt, and older women tell stories from the tradition. There is also some singing and dancing, while the stars and the moon stare at us. Time to dream and say goodbye with a lump in your throat. How we felt at home here … we are cuddled up for a while … a meeting to remember and a warm experience added to our backpack.

********
About te Jimmy Nelson Foundation
Jimmy Nelson Foundation‘s mission is an extension of Jimmy’s work. Jimmy’s work brings indigenous cultures to the attention, the foundation tries to show “The bigger picture”. Many of these cultures are all fighting to survive in their own way. Climate change, land rights and mining are putting even more pressure on these communities. The work of the foundation is twofold, on the one hand they try to (re) stimulate a sense of cultural pride among indigenous cultures themselves. On the other hand, they try to create worldwide awareness through social media and our website. They want people to come into contact with indigenous people. The long-term goal is that, by documenting indigenous peoples and their customs, they build an extensive online library of cultural pride. By giving them a face and a voice, the communities stand stronger against the advancing dominant culture and commerce.

To achieve this, we set up various projects such as research, education and collaborative projects with the communities. A few times a year we travel with a small group of volunteers to all corners of the world to document, also through the eyes of the locals, festivals, gatherings, special professions and other customs that may no longer be there. In addition, we also want to research together with the people on the spot, for the best and right way to support them in cultural preservation. One of this year’s projects, was to visit the Hadzabe in Tanzania, a project to which Explore Tanzania has been able to make a wonderful contribution. Thank you very much dear Marjolijn, you’ve helped us fantastic to make a wonderful project for the Jimmy Nelson Foundation.