A day trip from Arusha city to the Arusha National Park is a wonderful start to your safari in the north of Tanzania.

The green park is not very big, but has numerous remarkable sights and fantastic views of the mountains Kilimanjaro and Meru.

The main attractions of this park are the ancient fig trees, crystal clear water in flowing mountain streams and a chance to spot colobus monkeys.

Some of the numerous sights are: the Ngurdoto crater, rain forests, acacia forests, crater lakes and of course Mount Meru.

The green Arusha National Park is one of the most gorgeous and geologically varied protected areas of Tanzania. The park is dominated by Mount Meru, shaped in an almost perfect volcanic cone with a spectacular crater.

Despite the small area of the park, it has a variety of landscapes. Beautiful green forests cover the slopes of Mount Meru and Ngurdoto crater and you find a green savannah landscape in the lower areas. The shallow alkaline Momella lakes in the northeast have different algae colours and are known for their migrating water birds.

Arusha National Park is located on a 300 kilometer long axis of Africa’s most famous national parks, from the Serengeti and Ngorongoro Crater in the west to the Kilimanjaro National Park in the east.

The park is only a few kilometers northeast of Arusha city.

The climate in Arusha National Park is usually pleasant and mild. Dry season is from June to September and there are two green seasons, March to May (long rains) and November to December (short rains).
The average annual temperatures are consistent: cool at night and rarely hot during the day.

June to October
The afternoon temperatures are around 19 degrees, with lots of sunny weather and clear skies. The night temperature is cool and around 9 degrees. Occasionally, it can be close to freezing.

The temperatures in the green seasons are mild and comparable to dry season. The temperatures are usually around 23 degrees during the day and around 11 degrees at night.

November and December
A 30-day period with the chance of short rains in the afternoon. The temperatures are around 22 degrees during the day and around 11 degrees in the evening and early morning.

January and February
This is a dry period between the rains.

March to May
The wettest months. It rains on most days, but rarely all day long. Clouds are common. The temperatures are around 21 degrees during the day and 12 degrees at night. Crouches occur in April and May.

1. Mount Meru is 4,566 meters high and has amazing wooded slopes.

2. Mount Meru is the second highest peak in Tanzania after Kilimanjaro, which is only 60 km away and forms a wonderful background when looking east.

3. Arusha National Park is located just a few kilometers northeast of Arusha city, although the main gate is 25 hm east of it. At a distance of 58 km and 35 km are the city of Moshi and Kilimanjaro International Airport (KIA), respectively.

A safari in Arusha National Park is a great start for a safari tour in northern Tanzania. This park is easily accessible for a day trip from Arusha city. You visit what we call the ‘mini-Serengeti’; an area where you often see large groups of giraffes and buffalo.

Besides, you visit the shady mountain forest, which is inhabited by curious blue monkeys, the colourful turacos, trogon birds and the acrobatic black and white colobus monkey. These animals are easily spotted here. The spectacular Ngurdoto Crater is located right in the middle of the forest. Its steep rocky cliffs surround a wide swampy bottom with herds of buffalo and warthogs.

About 200 elephants live in Arusha National Park, often found in the forests on the slopes of Mount Meru. In addition, 400 species of birds call this park home.

Enjoy a walking safari in Arusha National Park.
You start at Momella Gate (the entrance to the park) and walk through this stunning area with an armed park ranger. Enjoy the impressive flora in the rainforest, the birds and animals and the volcanic landscape of Mount Meru and the Ngurdoto crater. During your walk, you have a nice view of the Meru and Kilimanjaro mountains on a clear day. 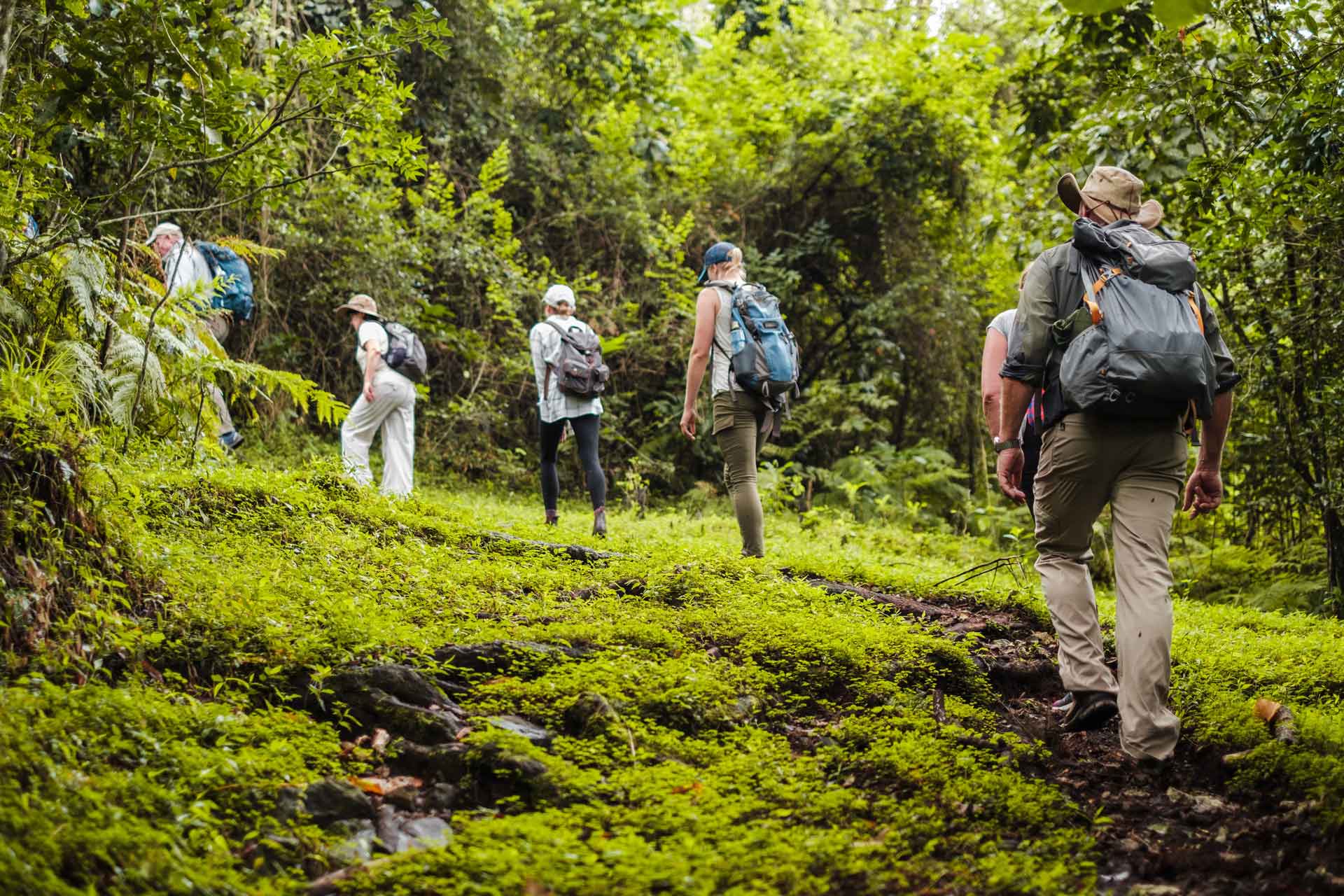 A canoe safari on Lake Momella in Arusha National Park offers the unique opportunity to get close to the animals.
The canoe safari takes approximately three hours. Float quietly with the guide, and behold buffalo, giraffes, waterbucks and many different species of birds on the shore. In addition, you have spectacular views of the Kilimanjaro and Meru mountains. 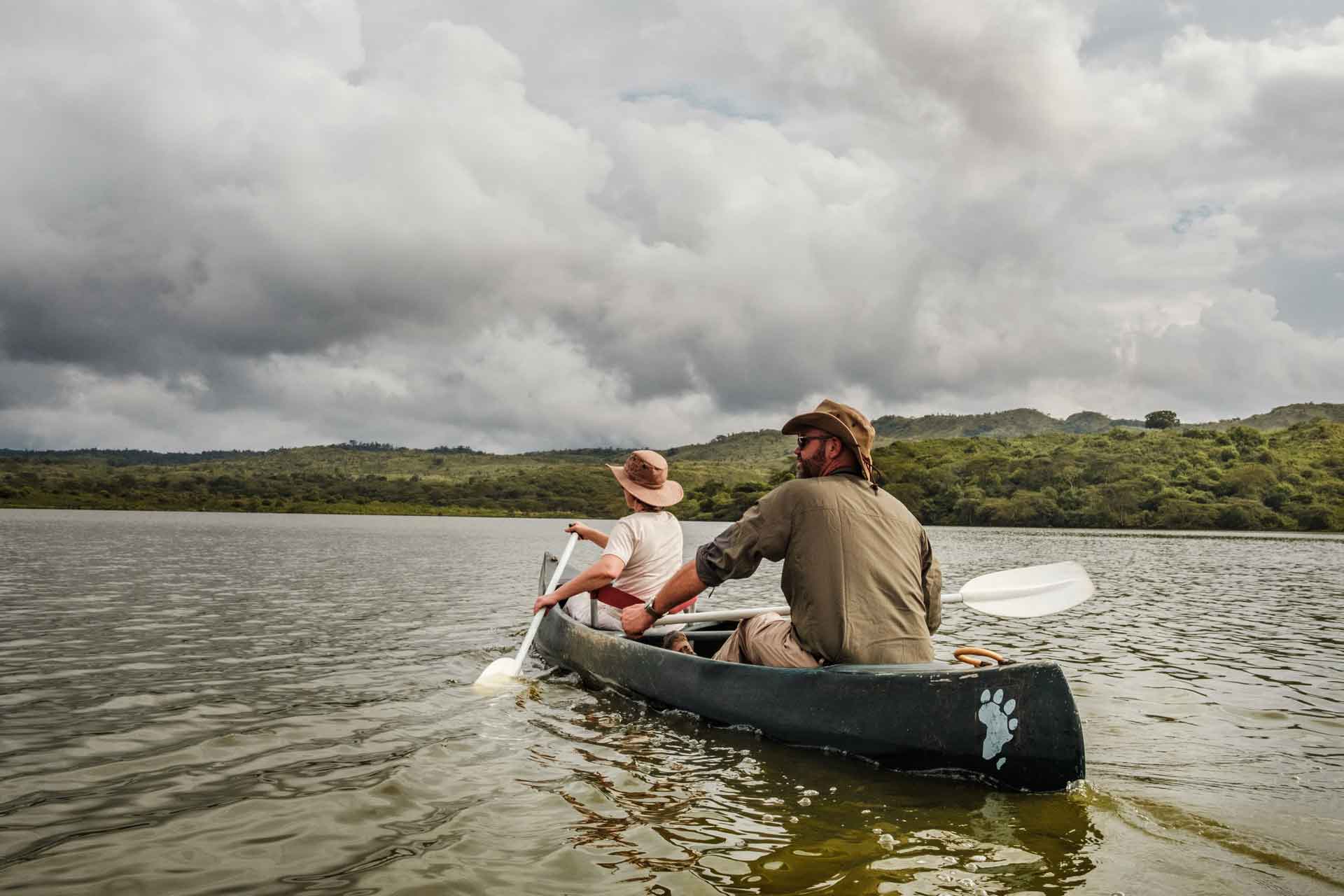 Arusha National Park is the starting point for a four-day climb of Mount Meru. A beautiful hike through the rainforest to the top of the 4,566 meter high mountain.

Mount Meru is a beautiful mountain to climb. The flora and fauna on Mount Meru is highly diverse. The route to Miriakamba Hut is more than just a mountain climb, it’s a true walking safari. There’s a good chance that you’ll see buffalo, wild boar, monkeys (including the rare, beautiful Colobus monkey), giraffes and elephants and many bird species. During the climb to the top of Mount Meru, you can enjoy beautiful views of the plains around, and the Kilimanjaro in the distance.

On the mountain, you stay in well-kept mountain huts with dazzling views: you see Kilimanjaro rise above the clouds.

In the morning, you’re picked up at the hotel and brought to the entrance of the Arusha National Park. First, you make a short safari through the park, en route to the starting point of this mountain bike safari: the Ngurdoto crater. The tour goes mainly around the edge of the crater where you have a beautiful view. During the trip, a park ranger joins you, as there is a chance that you’ll encounter buffalo, colobus monkeys, giraffes and various bird species.

The ride is partly on a dirt road and partly on steep and narrow paths that can be muddy. 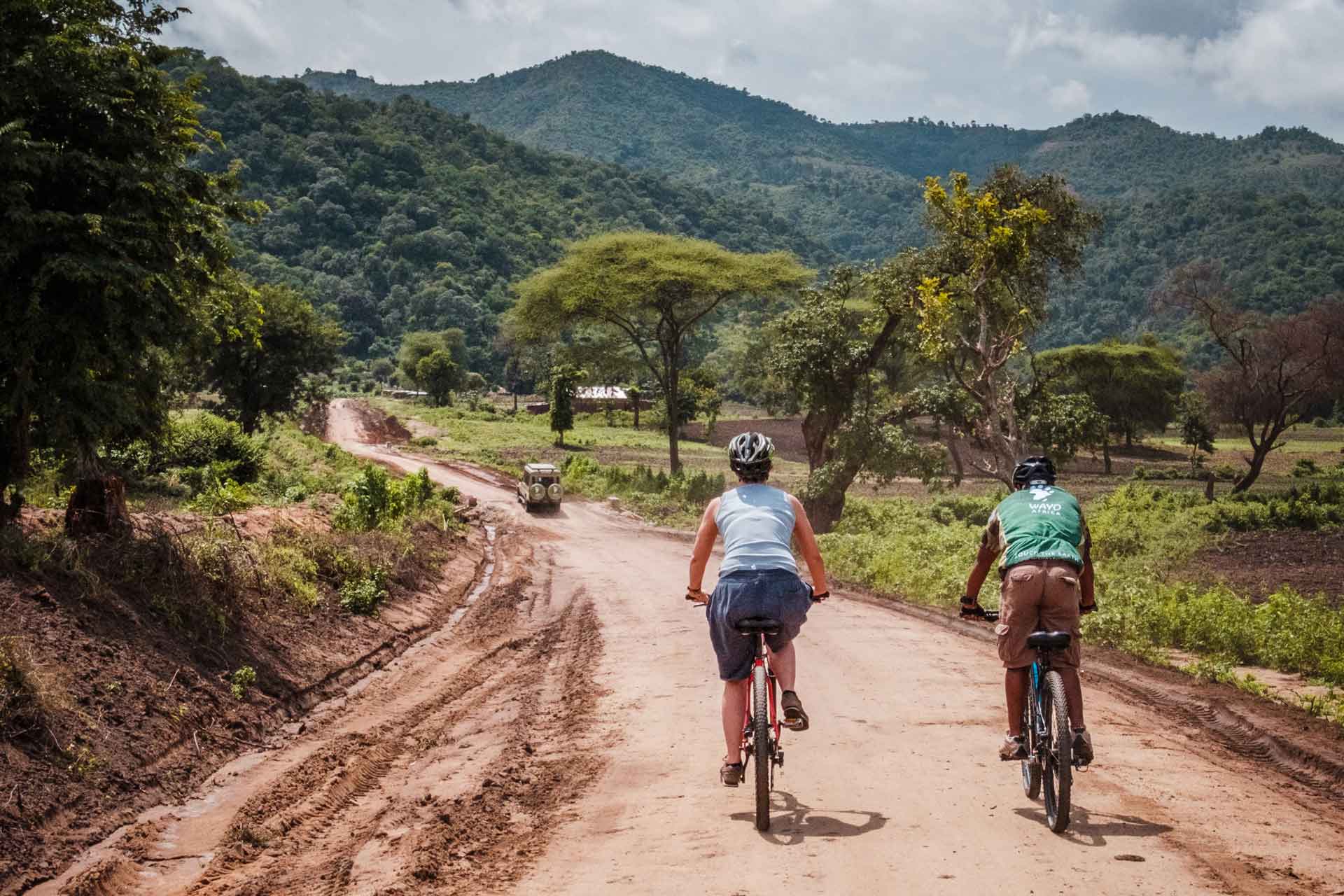 With the Kilimanjaro on one side and Mount Meru on the other, this horseback safari takes place in one of the most beautiful areas in east Africa. Chances are you see many animals while riding.

You drive through beautiful scenery, along elephant paths, far away from the main roads and other tourists. An area where, among other animals, elephants, wildebeest, giraffes, gazelles live. Exploring the African bush by horse is an extraordinary experience! The safari is suitable for experienced riders.

The Arusha National Park is rather small, with significantly fewer animals than in the other northern parks. The park is famous for its black and white Colobus monkeys, the Mitis monkey and the diver. 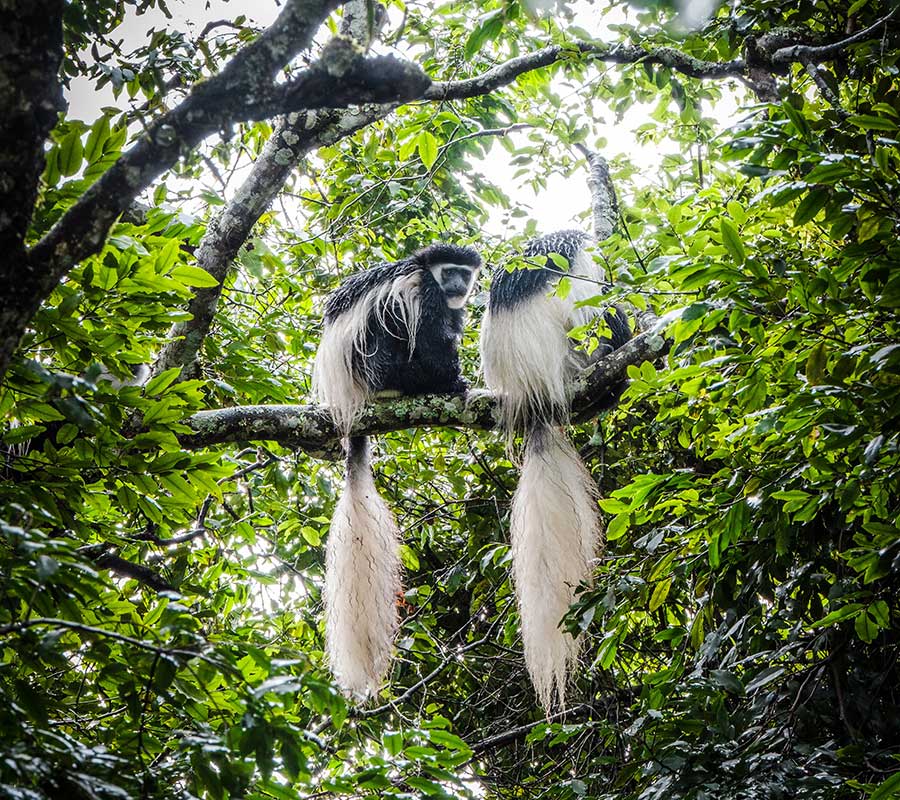 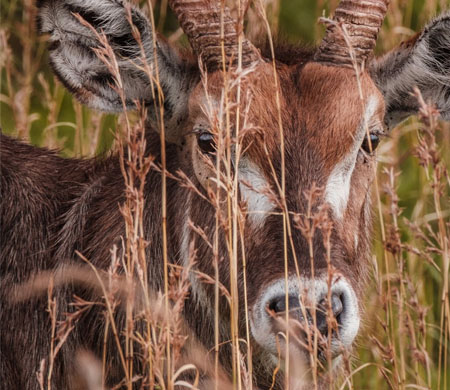 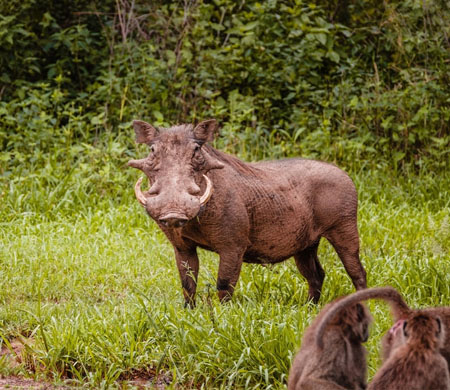 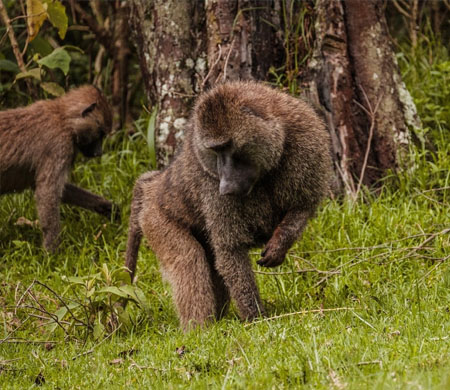 Canoeing and walking in Arusha National Park too?

We’ve selected a number of charming properties in the park. But because Arusha National Park can also be visited as a day trip from Arusha city, you can decide to spend the night there.