This Tanzanian kitchen garden is the international hotspot for biodiversity and a colourful introduction to a gem of Tanzania.

The Usambara Mountains is a bird paradise with many plants and animal species that occur nowhere else.
Because of the picturesque villages, colourful markets and plantations, this lush area is a welcome retreat from the busy cities and game parks.

Landscape and products of Usambara

Landscape
Unlike the classic image of East Africa – savannah – the Usambara mountains are lush and green. The Usambara mountains are covered with virgin tropical rainforest that has been isolated for a long time, leaving many special plants and animal species only to exist here.
Of the over 2000 plant species, 25% is unique to this area, just like 50 of the 275 tree species. The unique animal species found here are mainly molluscs, amphibians and reptiles.

The Mountains’ highest peaks reach to 2440 meters and lie near the Lushoto.

Products
Most residents are self-sufficient farmers, who heavily rely on the forests around them for timber, medicinal plants, open spaces for agriculture and fuel wood. Agricultural products are: corn, cassava, potatoes, tea, cardamom, vegetables, fruit and more.
Moreover, people live off tourism.

The higher areas are colder than the lower areas.
The temperature is between 16 – 30 degrees during the day and between 11 – 16 degrees at night.

March til May:
Most rain falls in April. Many hiking trails are therefore not passable during this period.

June til September:
This is the ‘cool’ period in the Usambara Mountains. There’s little rain and the temperatures are around 11 degrees at night and around 19 degrees during the day.

October til December:
Precipitation levels are rising again, this is the hottest period. During the day, temperatures can rise up to 30 degrees.

1. The Usambara Mountains are part of the Eastern ARC (Eastern Academic Research) Chain, (like the Udzungwa Mountains) and are divided into two series separated by a four km wide valley.

3. The main tribes are the Sambaa, Kilindi, Zigua en Mbugu.

4. After the Sambaa kingdom of Mbegha, Germans settled down in this area in 1862. This made the Usambara Mountains part of the German East Africa and later of the British Mandate of Tanganyika.

5. Lushoto was called Wilhelmsthal in German times and was a favourite holiday destination for colonial rulers. Nowadays, you can still find many traces of the German time here.

7. There are several authentic and picturesque villages in the area.

8. Due to the great diversity of unique animals that only occur in this area (endemic species), the Eastern Usambara Mountains are often compared with the Galapagos Islands.

The most important center in the west – the most accessible part – of the Usambara mountains is the city of Lushoto, with its arboretum (tree garden) and herbarium (plant museum). Here, you can also walk through the forest and seek out old buildings from the German and British colonial eras.

A walk in this area, led by a local guide, is the best way to get in touch with the extremely friendly locals and experience the diversity of this extensive area.

On a clear day, you see not only the grassy plains of Mkomazi, but also the Kilimanjaro.

Visit the Shangayu rainforest, a primeval forest with a great biodiversity of flora and fauna. Various monkey- and bird species inhabit this area.

The settlement of the Usambara mountains goes back 1.5 million years. Traces of which were found near the village of Mambo and can still be seen, including in the Ngozoi or Mambo caves.

The caves must have been created by a heavy earthquake causing a number of very large rocks to overlap. Earthquakes with an impact this heavy aren’t known in recent Tanzanian history, meaning they must have an ancient origin too. Because the Usambara Mountains is about 100 million years old, this is quite possible. These caves show traces of old and more recent habitation.

In ancient times, the caves were used for shelter by the Usamba who lived in the mountains and were attacked by the Maasai. Women and children hid in the caves during wartime and men looked out over the rocks. The name of the nearby village Mtae still recalls those days. Mtae means “counting” and is suitable since people counted the number of attackers that were rising, so the defenders knew how many stones they had to throw.

The Amani Nature Reserve was established in 1997 to preserve the unique flora and fauna of the – less accessible – Eastern Usambara Mountains. The Amani nature reserve has a tropical cloud forest habitat.
The submontane, evergreen forests grow especially on the sea side of both the west and east of the Usambara mountains.

Depending on the native moist forest cover, there are different types of mites, spiders, freshwater crabs, dragonflies, beetles, butterflies, centipedes and molluscs. There are relatively few large mammals in the reserve.

The research center founded in 1902 on the hill Amani, has done much pioneering research into malaria.

The Mkomazi National Park is a beautiful 3500 km2 national park in northern Tanzania. Remote and inaccessible at first, it was founded in 1951. From Mambo View Point Eco Lodge it’s only an hour and a half drive to the entrance of Kivingo.

The Mkomazi National Park is a spectacular wilderness near the Usumbara mountains, with the Kilimanjaro in the background. This is the land of wandering herds of elephants, oryx and zebras during the wet season. But also giraffes, hartebeests, lesser kudu, moose, impala and Grant’s gazelle, buffalo and many predators, including lions, leopards and cheetahs. A total of 78 species of mammals have been registered and 400 bird species, including hornbills, weavers and guinea fowls and the warlike eagle.

The Mkomazi National Park is less known and therefore not so crowded, making the animals behave naturally. Almost all species are to be found, including the highly endangered black rhino and African wild dog.
Conservationist Tony Fitzjohn and his team, together with the support of the Suzuki Rhino Club, among others, are working hard to bring back these two highly endangered species; the Mkomazi Project. Currently, fourteen black rhinos live in a fenced and guarded area of 50 km2. The breeding program has also brought 60 wild dogs back to nature.

Because the Usambara mountains have been isolated for quite some time, its flora and fauna contain many unique species.

Common animals include the diver antelope and wild boar, two types of monkeys and many bird species. Unfortunately, the elephants and leopards that once inhabited the area are no longer here. 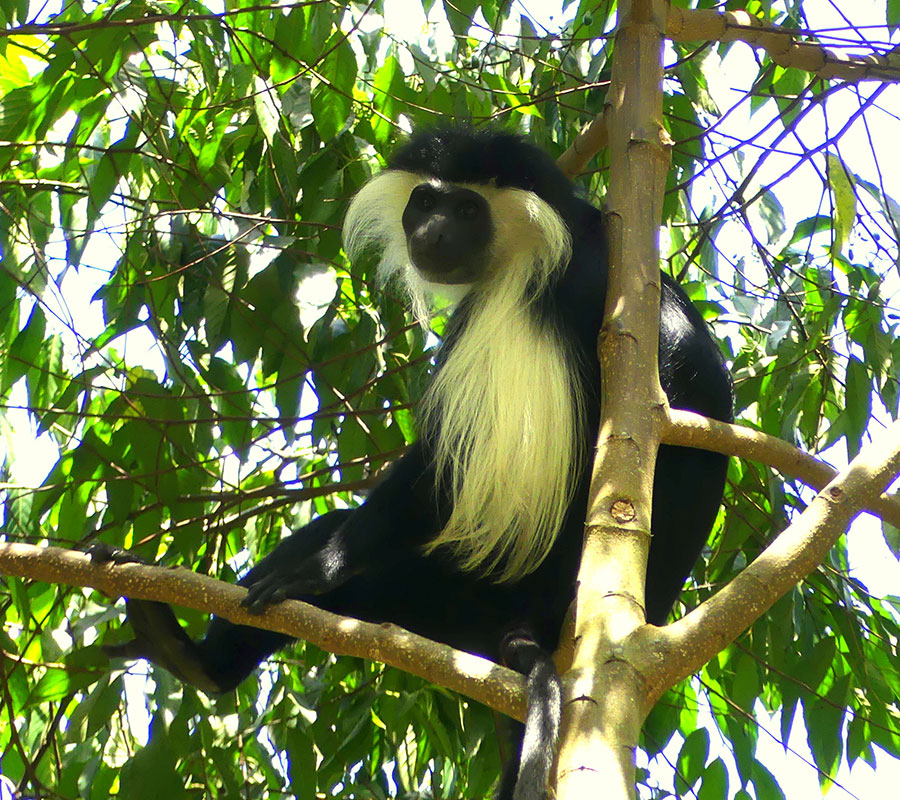 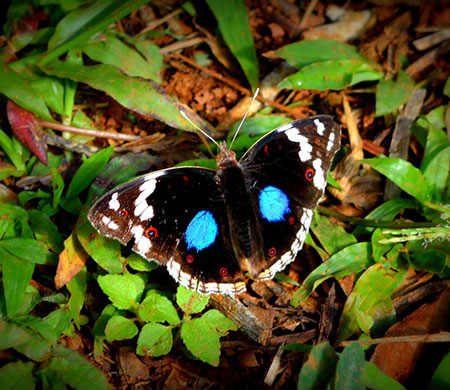 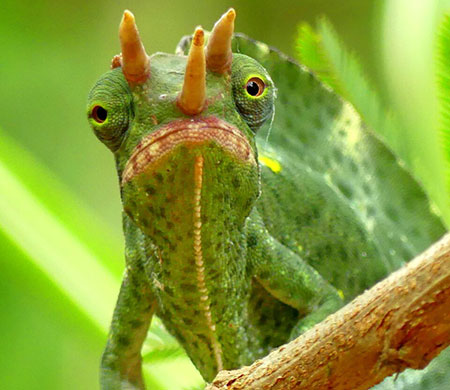 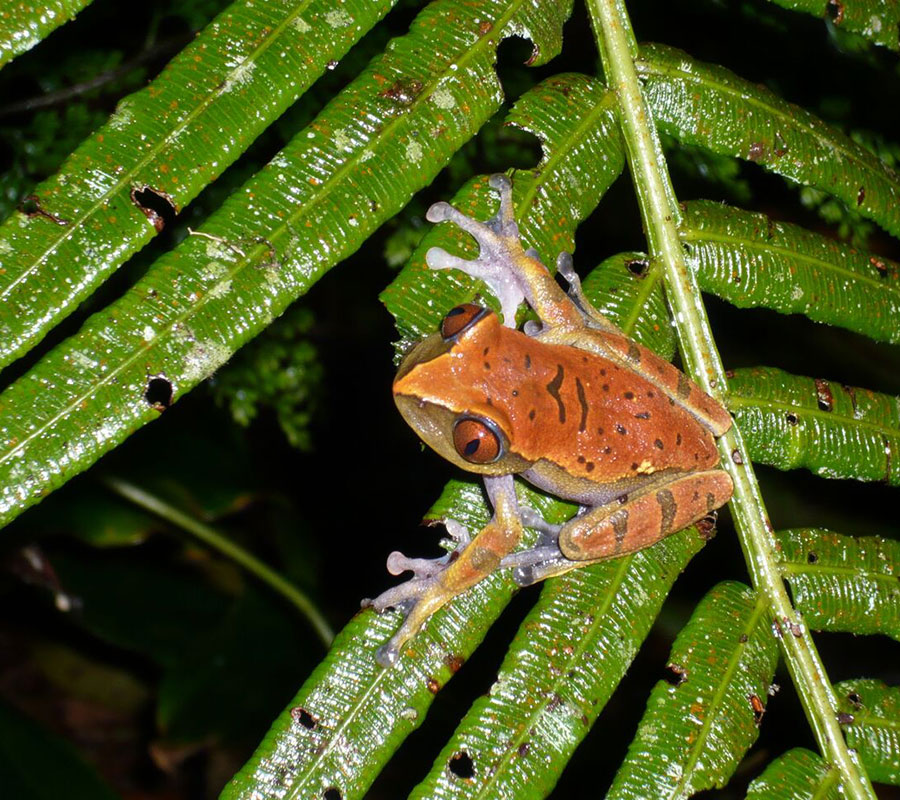 Imagining yourself in the Usambara Mountains yet?

Have a look at the example trips that can be customized to your specific preferences or contact us directly!

Stay in a very atmospheric eco-lodge, with breathtaking views over the African plains and mountains with the Kilimanjaro in the back.

Great as a starting point for stunning eco-cultural walks.