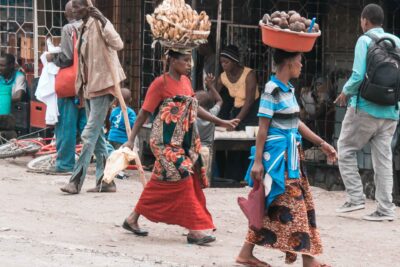 When we walked out of Kilimanjaro airport, dozens of dark-colored happy faces were looking at us expectantly. What a welcoming committee! Walter became our guide for the next 12 days!
After some acclimatization at our delightful lodge we were immersed in the chaos of Arusha. Colorful people everywhere, houses that are just about to collapse, people on motorcycles with short clothes and without helmets. Women carrying barrels, bags, water bottles or even woods on their heads. Tuktuks, bicycles, carts loaded with piles of stuff. Or people just sitting, on a plastic chair next to the road: “waiting for work..” The roads are dusty under the sweltering heat of the sun. This is Africa. It felt like going back to the time when corona didn’t exist. 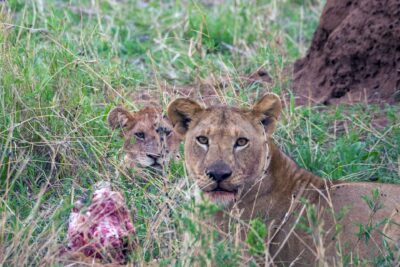 After Arusha it was time for safari. With our open jeep (Explore Tanzania made this possible on request!) we set out for our first Safari destination: Tarangire! Tarangire is known as Elephants Paradise. And we knew that! We have seen a lot of elephants here. But also zebras, buffalo, wildebeest, warthogs, ostriches, lions, many different birds and much more… Walter told us all about nature and their inhabitants. Tarangire also has the special Baobab tree. Huge whoppers, which stood out beautifully against the sky of the sunrise and sunset. We slept in the middle of the park in a tent with field beds (the service of Explore Tanzania) where we also met our cook “Goodluck”. During the safaris, Goodluck has always provided a substantial breakfast and delicious lunches and dinners. His life quote: “Hakuna Matata” (don’t worry). And not just from Goodluck. Because all the inhabitants of Africa live the Hakana Matata way. Relaxed, relaxed and above all don’t worry too much. Maybe we should all do this a little more!?

What a start to our safari it was in Tarangire: it feels ultimate when you open the zipper of your tent in the morning and see many baboons and a giraffe skip past. Every day we got a warm lunch and we “picnic” (read: the Explore Tanzania way, with our own table, chairs and a tablecloth) somewhere in the middle of nature with often the most beautiful views. After Tarangire we drove to Mto wa Mbu. A bike tour through this village with again many calling and waving children along the road. You were spontaneously happy about this! We visited different places and also rice fields, a banana plantation and we drank “banana beer” (from a recycled Heineken bottle) with locals. A delicious local lunch in between with dishes from the different tribes in Tanzania. It was a nice stopover between safaris. 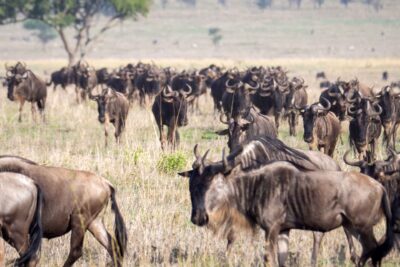 We then drove to a beautiful green campsite including a bar and an infinity pool with a view of Lake Manyara. We spent New Year’s Eve here, but we were already rosy with wine in our tent at 10.30 p.m.… Which was not a bad thing when you go back into the park at 06.30 the next morning. A special start to 2022! Lake Manyara was a completely different environment, namely more rainforest. We also did a night safari in this park. Armed with a huge spotlight and a guard of the park including a gun (because, just in case..) we left in an open jeep. On the hood of the jeep was a seat with a guide on it and what sharp eyes that man had! In the dark we spot completely different animals than during the day (think of a Genet Cat and porcupines). A special experience with the starry sky above your head and nothing but the black night and the sound of nature around you. After Lake Manyara it was time to leave for the Serengeti. 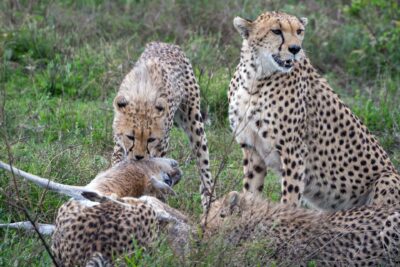 The drive there was already a feast for the eyes. Every 10 minutes the landscape changed. It was a wild, bumpy ride and we still had our roofs open so we arrived in dust at our first stop for the next game drive: Ndutu. Nice to start here, because for the animals this is also the start (and end point) of the migration. Wildebeest, giraffes, zebras, yet another nature and to top it all off, we spotted a mother cheetah with young that had just committed a kill. The impala was still moving when we arrived and you could see the young cheetahs practicing the “grip on the throat” of the impala. Very impressive! We drove on to the Serengti and passed “the kopjes” (large stacked rocks) on which the Lion King is based. When a lioness stood on top of the rocks you had the feeling that you had almost ended up in the movie itself. 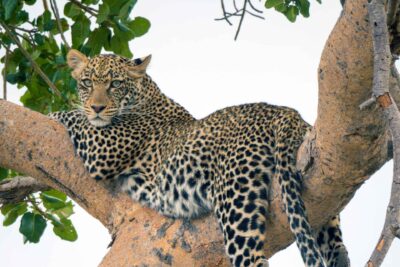 Suddenly a male cheetah slowly crossed in front of our jeep. He had his eye on some grazing impalas. He crept towards them …slowly, through the tall grass. You hardly saw him. Then he suddenly launched the attack, but… He missed! Luckily for the impalas, the cheetah turned around (back to us) with an empty stomach. Once in the Serengeti it was just: WOW, WOW, WOW. The luxury tented camp (recommended) in the middle of the Serengeti, the game drives from 6 to 18 hours, experiencing the migration up close, the starry sky with countless stars, beers every evening by the campfire and of course countless wildlife. Several leopards, several (baby) cheetahs, a lot of lions, cubs, tree-climbing lions with elephants underneath, a civil cat, hippos, turtles, crocodiles, buffalo, you name it. Perhaps one of the most beautiful scenes was that we saw that “the king of the jungle” was chasing a leopard. Another wonderful moment was when 2 lionesses were enjoying their meal behind our tent: a wildebeest that they had killed in the middle of our camp. (It’s a good thing you weren’t allowed out of your tent alone, by the way…) We were able to shoot beautiful pictures and I can safely say that we imagined ourselves in the middle of a National Geographic documentary. If you have the chance, put Serengeti on your bucket list!

After the Serengeti we left for the Ngorongoro Crater. Back to basics we camped on the edge of the crater where it was quite cold in the evening. But if you see a herd of zebras walking between the tents while brushing your teeth, those cold nights are worth everything! I haven’t mentioned the incredible sunrises yet. The crater was a large plain, beautiful nature, the burning sun, butterflies, flamingos in the lake and all kinds of different animals in one place. A very peaceful beautiful place. Back to reality when we saw a pack of lions tearing up a buffalo!
After the crater, Walter took us to the airport in Arusha to fly from there with a small propeller plane to Mafia Island. Flying was an adventure in itself. We were in the plane with 6 people and the “co-pilot” was a tourist (in other words: not a co-pilot). On landing we were unable to continue as our wings would hit two other parked aircraft. But don’t panic, the pilot gets out for a while, pushes the other plane to the side and we drove on. We were happy when we arrived at the tiny airport after a sweltering, half-folded flight! 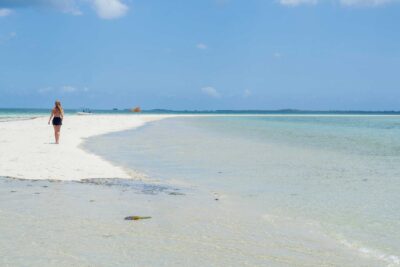 We absolutely wanted to go to Mafia because the migration of the whalesharks takes place during the period that we were there. In addition, Mafia is much less touristy than Zanzibar, you have a beautiful underwater world (so great for diving and snorkeling) and it is simply idyllic with the white beaches. In addition to Hakuna Matata, “Pole pole” (slowly, slowly) also applies here, so you can imagine what that meant… Nice and African way! We stayed on a quiet beach on the clearest bay of the island. Mafia was also an adventure in itself. The three of us on a motorbike without a helmet (sorry mom), drinking from coconuts whenever you feel like it, a visit to a super white private sandbank, sailing during sunset on a traditional “dhow”, snorkeling & diving in a beautiful underwater world and to top it all off: the whale sharks! And what an experience this was! You will go on a boat where you are already fully installed (fins on, mask and snorkel on, ready to go!). 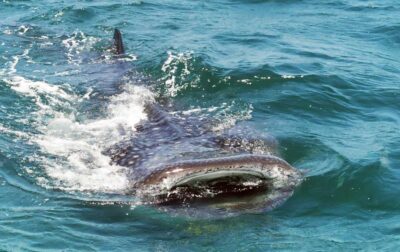 The captain looks for ghosts in the water. As soon as he spots one, the boat speeds past the whaleshark, and the moment he yells “GO” you jump into the water. From that moment on, it’s every man for himself! Swimming for your life to keep up with him. The first few meters you get 12 sips of seawater and you are out of breath (partly due to the adrenaline and tension) within 20 seconds (I must say that breathing through a snorkel with high effort was also quite disappointing 😉). If you don’t feel like taking swimming training before you spot whalesharks…..: you can also see the whalesharks very well from the boat because they keep coming to the surface to eat plankton. This experience made our Tanzania adventure more than complete.

What a country, what hospitality, what nature and what wildlife! One thing is certain: we will come back here. 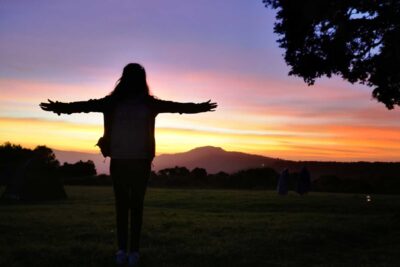