After a long wait and several postponements due to Corona, we finally left at the end of May on our dream trip to Tanzania. After consultating with Marjolijn about travelling in Corona time and all the snags that come with it, we decided to go this year. Now that we are back we can say that it was absolutely the right decision and that we are very happy that we went.

After an 8 hour flight we arrived at Kilimanjaro Airport. We were surprised to see that the plane was almost full. After landing we had to get a rapid-test done: this was organized in the African way, but after about 1.5 hours we were on our way to our lodge in Arusha. 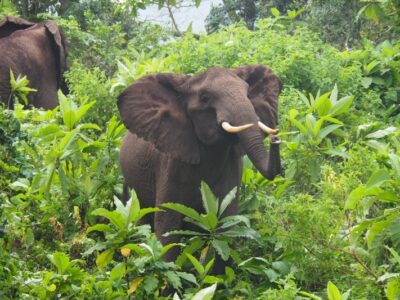 The next morning we met our guide Emmanuelle at the lodge with whom we are going on safari for the next days. On this first and cool day we finally realised that we were really going on safari! We didn’t have to wait long to see the first animals in Arusha National Park. 5 minutes after we entered the park we already encountered the first buffalo, zebras, warthogs, vultures and Maribou storks. We also saw a lot of different monkeys including the Black & White Colobus monkey for which the park is known. Arusha is skipped by some people but we would recommend everyone to visit this park because it is so different from the other parks you normally visit in Northern Tanzania. The highlights of the day were the large herds of giraffes that crossed right in front of our car and the large group of elephants who were kind enough to pose in front of our cameras. According to Emmanuelle, this was not common as the vegetation is very dense after the rainy season, and because the elephant population in Arusha National Park is not very high. The rainy season had also affected the roads in the park. They were being renovated, so we got our African massage on day 1. 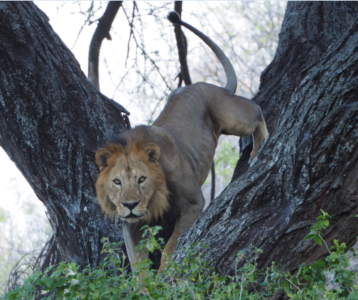 On day 2 we continued to Lake Manyara National Park. Also here the rain has affected the park. The water level is very high and in some places the roads have disappeared. Emmanuelle made sure that we could see all the beautiful places in the park. The Hornbills welcomed us at the gate and we saw the first elephant quickly. However, the best part of the day was saved until after lunch. From our jeep we saw a huge herd of elephants moving through the woods, right next to the road. On their way they passed a tree in which a lioness was enjoying the cooling shade. Lake Manyara is known for the lions that climb trees. We had to be quick with our camera’s before the lioness saw the approaching elephants. However, she remained calm on her branche, and was not impressed at all by the large herd of elephants. On the way our of the park we also spotted a male lion in the tree. He roared when our vehicle drove over a large branch. A very impressive experience! We spent the night in a tent under the beautiful starry sky and woke up with a view over Lake Manyara.

On day 3 we leave for the Serengeti. We passed the Ngorongoro Crater which we will visit on the way back. After a long drive past the Masai villages on the gravel roads towards the Serengeti, we didn’t have to wait long before we spotted the first lions. That day we also spotted a leopard in a tree and in terms of lions we counted at least 30. We also saw the first large herds of wildebeest and zebras. Several hunders of them together. On the following days we saw countless amounts, as far as the eye can see. Upon arrival at our camp, we were welcomed by the staff. An elephant is peacefully grazing about 30 meters from our tent.

The next morning we got up early for a fantastic balloon safari. Very cool to see the vast plains of the Serengeti from this height. The road to the balloon’s departure point is a game drive in itself. We saw lions, hyenas and a serval. In the afternoon we saw animals that were high on our bucketlist: a cheetah and several secretary birds. We saw giraffes and elephants in abundance and the herds of the migration colored the horizon. Tired but satisfied, we enjoyed a drink by the campfire that evening and let all impressions sink in. In the following days in the Serengeti we saw cheetahs devouring their kill, herds of wildebeest fleeing from a lion at full speed in front of our jeep, hippos that came out of the water and so much more. The best was saved for our last morning in the park. We saw a viper on the road and according to Emmanuel that means that it will be our lucky day. And yes we were lucky! Half an hour later a cheetah crossed in front of our car and later we see a leopard lying in a tree a few meters away. Despite the tall grass, the Serengeti was everything we expected it to be and so much more. We even spotted a bushcat in the bushes, something that was also a first for Emmanuelle in his 15 years as a guide.

On day 7, we went for our PCR test in the morning. This didn’t go very smooth, but thanks to our guide Emmanuelle the proces went faster and we got to the Ngorongoro crater with plenty of time left. Upon arrival at the crater floor, the amount of animals was overwhelming. The diversity of different species intertwining is almost unreal. We also saw a rhinoceros, which means we saw our Big Five. Not a goal in itself, but still cool that we were able to see all these beautiful animals on this fantastic trip. At the end of the day we left the park with a satisfied feeling.

The last stop on our journey is Tarangire National Park. The grass was quite high and we got eaten by the Tsetse flies. After lunch at the lodge with a fantastic view (we saw giraffes and elephants walking from the veranda) we head out again. We saw zebras, elephants, owls, hornbills, giraffes and a pride of lions chewing away on a dead zebra. We also came across a male elephant who wasn’t in a good mood. Even though we gave him space and stayed at an appropriate distance, he turned and came for our jeep. Emmanuel reversed and we decided to choose another road and give our grumpy friend his space. On the last day we saw cheetahs, a lone male lion on the road, huge herds of buffalo and a pride of lions with a few cubs. 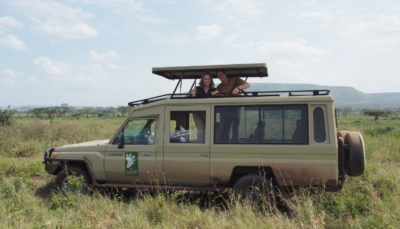 After this beautiful end of the safari, we left for the airport for our return flight. The rapid test procedure was once again chaotic, but despite the fact that we had already said goodbye to Emmanuelle, he still came to help us out. After testing negative we were ready to go home.

We can be brief about travelling to Tanzania in Corona time: don’t hesitate and just go! It is wonderful and quiet everywhere, both in the parks and at the lodges. In many camps and lodges we were the only visitors, very annoying for the people in Tanzania, but nice for us. Everywhere we were treated like VIPs and everyone in Tanzania was very happy to see that the tourists are slowly returning to this beautiful country. As mentioned, it is quiet everywhere and it is expected that this will remain so until next summer. You spend most of the journey together with the guide in the jeep so you hardly come within 1.5 meters of other people. At the supermarket in Europe there is more risk of contracting something than on safari in Tanzania. Testing did not spoil the fun for us either. And despite the fact that this was a bit chaotic, we were helped by the skilled people from Explore Tanzania. We had a great time and will definitely come back to this beautiful country with its fantastic nature, impressive animals and friendly and hospitable people.