Due to the ever-changing travel color codes and associated measures, we decided only 4 weeks before departure which travel destination we would take. A safari through Tanzania seemed in every way the best option we could take this summer; an enormous amount of animals and beautiful landscapes, little contact with other people (= corona proof), direct flight from Amsterdam, only 1 hour time difference, no far-reaching corona measures that discourage from traveling (PCR test before departure, rapid test on arrival in Tanzania and 1 more PCR test before departure), …

After we received a travel proposal from a travel agency in our area that did not go beyond standard safaris organized by standard lodges, we continued looking for someone who could fulfill our travel needs. Then we came across Explore Tanzania. In the morning we e-mailed them with the question whether they could still organize a trip for us in such a short period of time, in the evening we were already having a meeting with Marjolijn about our travel wishes and options, and we tailor-made itinerary. The fact that we have not made any changes to the proposal indicates that we were listened to carefully. 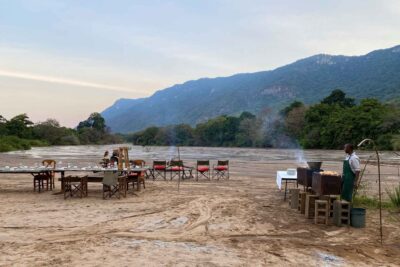 On day 1 we arrived at Kilimanjaro Airport. Airport staff used the polé polé method; it took us about 2 hours to pass the checks and Covid rapid test and to leave the airport. There a driver was waiting for us who took us to our first place to sleep, Rivertrees Country Inn, which has a very nice garden.

The next morning we were picked up by our guide, Gabriel. On the way to the Tarangire Park we drove past different landscapes, villages and cities, which immediately gave rise to a lot of conversation regarding the differences in culture. 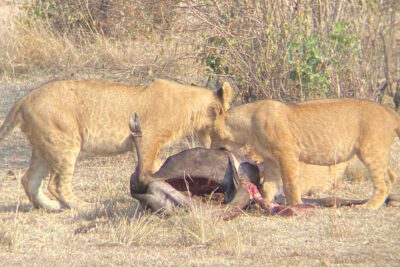 Once we arrived in Tarangire Park, we soon came across the first baobab trees (yes Gabriel, Lorenzo can pronounce it correctly by now :)) and animals. During the 2 days we were in the park, we saw an enormous amount of elephants, but also giraffes, zebras, lions, a leopard that had eaten a cheetah (very special from what we were told) and many other large and well-known animals, but also many beautiful birds. When spotting a bird that I had never been seen before, Gabriel immediately took out his book so that he could give us the (physical) details of the bird and you can look even more closely at how beautiful the bird is. We stayed in the Tarangire Safari Lodge, with a beautiful view of the savannah and the animals. 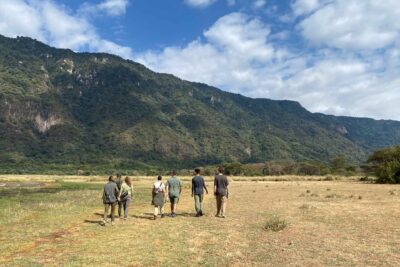 From Tarangire we took the southern route, a bumpy but beautiful ride, to Lake Manyara. There we stayed in the Green Camp, a beautiful location at the foot of a waterfall that you can also partly climb. In this park we did several game drives, a walking safari and a night safari. On the walking safari, two rangers took us around the lake and explained to us various things (whose excrement and  footprints came from, how old a carcass was and why, …). You do not see animals up close, nevertheless it does give a different and interesting experience of a safari. During the night safari we encountered a lot of animals that are only active at night. 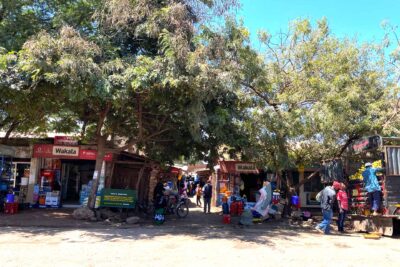 Before heading to the Ngorongoro Highlands, we did another Treetop walk and stopped in Mto wa Mbu for a bike tour and a local lunch. You don’t see many animals on the Treetop walk, but we thought it was a pleasant addition to our program. During the bike tour we went through the village to the market, rice fields and banana plantations, where local guide Zaki gave us the necessary explanations with great enthusiasm. The local lunch provided more than 10 different traditional dishes for us to sample. 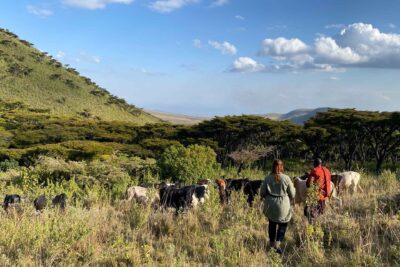 We visited the Ngorongoro Crater on Gabriel’s advice early in the morning because, according to other guides, there were few animals to spot in the afternoon because of the heat. We were already at the entrance gates at 7 in the morning. In the afternoon a Maasai guide took us on a hike in the countryside around the Mysigio Camp where we stayed. We will probably repeat ourselves, but this was also a very nice place to stay. Our second night on site we were the only guests of the camp, but this certainly didn’t feel uncomfortable and was also nice because you get even more interaction with the employees. 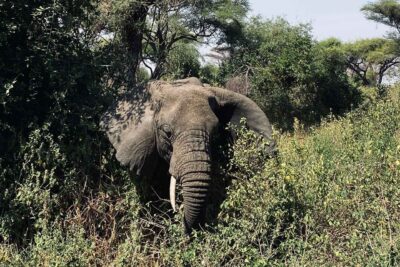 From the Ngorongoro Highlands we traveled like the wandering animals, via a long bumpy gravel road with beautiful views, to the North of the Serengeti where we got a flat tire and after 5 minutes already got help from another safari car. During the trip we have noticed so many times how the guides from different safari companies are so jovial/collegial towards each other.
On the way north, Gabriel added a short game drive in the central part of the Serengeti. 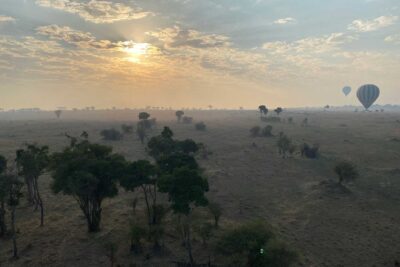 We stayed in North Serengeti for 4 days, 2 of which in the Green Camp Kogatende and during the second night we saw an elephant eating a tree about 20 m from our tent. We saw thousands upon thousands of wildebeest gather to cross the Mara River and we were also lucky enough to see a crossing up close. We also flew a hot air balloon over the park early in the morning. We even had the hot air balloon all to ourselves… It was very special to experience the Serengeti in this way. The last 2 days we went on a walking safari. For this we had to say goodbye to Gabriel and we got walking guide James instead. It is still amazing to us how you build a bond with the guide in 8 days. During the walking safari we went on a walking tour with James and a ranger (Sylvain) around the camp, where no other people, vehicles or structures can be seen or heard in the wide area. You can’t get closer to nature. James passionately told us about approaching animals, recognizing sounds and many other secrets and customs in nature. In addition to the hundreds of wildebeest, we also unexpectedly encountered a group of elephants during a walk. 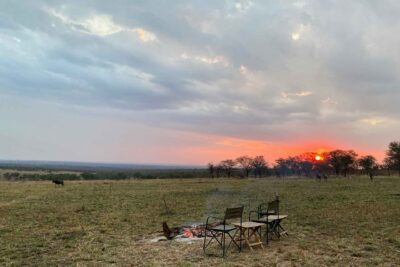 The last day we took small local planes back to Arusha via South Serengeti and Lake Manyara. There Babou picked us up and took us via a quick sightseeing through the city of Arusha to a day hotel where we could freshen up before taking us to the airport.

When we think back to Tanzania, we see a lot of animals flash past our thoughts, but at least as many people. Our guides Gabriel and James were each top notch in their own way and all the residence staff were so immensely friendly, helpful, smiley and sweet. Together they ensured that we had an unforgettable and incredibly beautiful trip.

And we can only recommend other people to visit Tanzania and capture the same adventure at Explore Tanzania, because the diversity of activities, the respect for nature, the Green Camps and the professionalism of the own trained guides form a very big added value for such a journey. Also in Covid times, don’t hesitate. The camps are small-scale, you come into contact with very few people, all your worries are taken away (including the PCR test on site), there are very few people in the parks, so you do not have waiting times at the access points and always close to the animals state, … And above all you ensure that the Tanzanian economy, which is so dependent on tourism, and which affects the lowest layer of the population, is kept going.