Our trip to Tanzania and Zanzibar left an indelible impression on us. A previous safari has taught us that it is very difficult to put into words how breathtaking such an experience is. This was confirmed once again in Tanzania.

Like so many travelers, our trip started chaotic because the situation at Schiphol is simply a mess. Yet we were on the plane at the last minute (but just in time) after which we completely surrendered to all the beautiful things this trip had to offer. And that was a lot!

After a comfortable journey we were taken to Ngare Sero Mountain lodge for the first night. The road to the accommodation taught us that we had really arrived in Africa, but eventually the beautiful old farmhouse loomed up. It was now close to midnight, but there was still a good meal waiting for us. 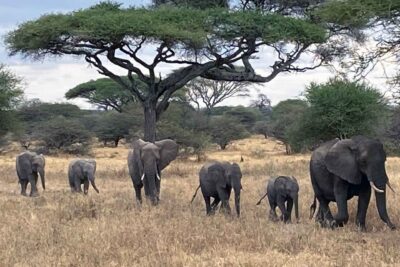 Rested and well, we were picked up the next morning by our guide George who became a lifelong friend later in the week! Under his guidance we drove to Tarangire National Park where the first herd of elephants soon crossed in front of our car. To make you quiet, that would happen more often later in the week. Or actually a few minutes later! We were lucky that the King of the Animals was soon waiting for us; the lion in all its glory! Zebras, impalas, monkeys, wildebeest, meerkats, warthogs, waterbuck and many beautiful birds. And all of this explained by the knowledgeable, involved and extremely friendly George. That evening we were dropped off at Lake Burunge tented lodge, another picturesque spot in the middle of the wilderness. At night we were woken up by noisy monkeys. Our guide told us the next morning that this was probably because they wanted to warn each other of approaching danger: the leopard! So close to our tent! 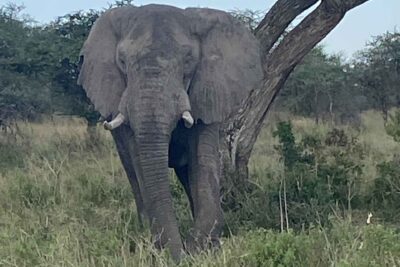 After a delicious breakfast we left for Lake Mayara National Park. In a much denser environment it was initially a bit more difficult to spot animals, but George’s ears were also good enough to detect a lot of game: hippos, baboons, deer and again beautiful birds (in addition to a lush flora!). George had set himself the goal today to track down the buffalo, but unfortunately he has not (yet) succeeded. However, we are confident that this will be accomplished soon. The third sleeping place was (again) a picture, actually the most impressive of all. In a tent where the staff had to come and fill your shower as soon as you wanted to bathe with a compost toilet. But what was much more impressive: on a river where a large herd of elephants came to drink at sunset. At “touch distance”! With a large group at a long table with delicious food and good wine …. we had instinctively arrived in paradise. 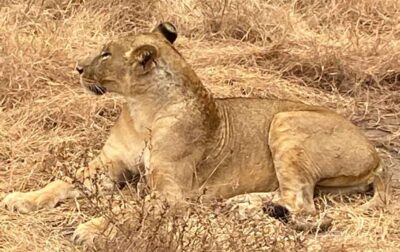 After breakfast we went to Mto wa Mbu, a village near the accommodation. George got help from a guide in training. A super friendly boy with the same sharp eyes and ears as George. We wouldn’t miss much. If you don’t pinch yourself, al these animals around you becomes almost normal. Elephants, giraffes, dik-diks and monkeys crossed our path. Plus, we were able to face a lion family just a few feet away. In the village of Mto wa Mbu we were guided around to get acquainted with the local people and customs. After a tour along banana plantations (also red ones!), a school and the local shopping street (….). Afterwards we were offered a local lunch, complete with banana beer….Give us Kilimanjaro beer, If you don’t climb it, drink it! Mid afternoon we were dropped off at our next accommodation, Rhotia Valley tented lodge. After a visit to the local orphanage, we enjoyed the view (1700 meters high) and again a delicious meal. 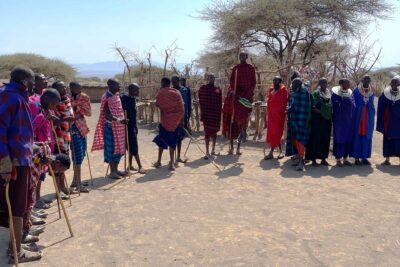 The next day we had to get up early on our way to the Ngorongoro crater. In the past few days we had already spotted two animals of The Big Five: elephant and lion, today we could just add the buffalo! Hyenas (who appetizingly munched on a wildebeest), flamingos, pelicans, hartebeests and even a python crossed our path today! We discovered today’s dessert shortly before we arrived at our lodge: the rhinoceros. So ticked off! We had 2 great days in the crater but… we had to move on. Off to the Serengeti. On the way we visited a Maasai village. We were not only shown around, we were taught how to make a fire and we visited a school again. The children were almost afraid of tall, white men, but in the end the ABC was recited for us at full blast. Oh yes, we were also allowed to jump with the young men. They did get a little higher to be honest. Shortly after, we easily added 2 new animals to our total: the moose and topis. Quietly looking around us (well, quietly, the road with all its bumps and potholes again provided an African Massage) we suddenly found ourselves in front of…..the leopard! Not only a beautiful animal but also the missing link in our Big Five puzzle. As if it should be, we spot another one later. Our day couldn’t get any better. In the evening we were dropped off at Hippo Trails Camp. A location where the hippos (what can they smell) quietly walked around our tents at night. That everything was right this trip was confirmed the next day. We went in search of the cheetah and….. we found the cheetah. It was just impossible because at the end of the day we were also face to face with the crocodile. 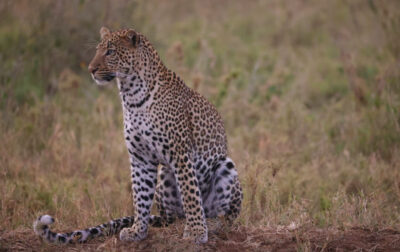 As mentioned, it all seemed to become almost normal over the days. But that is of course not the case! Especially not if you suddenly see a lion between the bushes when you get on the jeep in the morning. About 75 meters from our tents. It just kept passing by, all the beautiful things Tanzania has to offer. Almost incomprehensible. We tried to take it all in, but it’s almost impossible to do that…

That evening the last dinner with our friends George and Hassan. We were already a bit sad that we had to say goodbye to them tomorrow. Sure enough, tears with spouts at the small airport in the Serengeti. It might get a little lyrical but…George and Hassan, we will NEVER forget you! 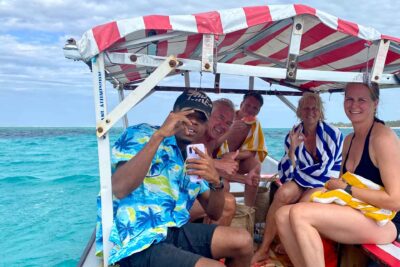 From the plane we looked again over all the beautiful things that had passed us the past few days. What a beautiful face. The following days we were able to enjoy everything we had experienced in Zanzibar in a very relaxed way, but also all the beauty that Zanzibar has to offer. Beautiful accommodation, beautiful beaches, great snorkeling and to top it all off, had a delicious meal at The Rock. We left Africa with a heavy heart and promised ourselves that we will definitely come back for the next part of the African Dream.