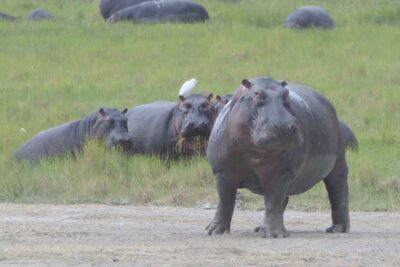 Travel to Tanzania and Mafia Island.

After two years of waiting we went to Tanzania, on July 9th. We avoided the crowds at Schiphol by booking with Luxury Airport Services, which meant that we were through security and customs within 15 minutes, a relaxed start to our trip.

After a good flight we arrived at Kilimanjaro airport where the guide was waiting for us to take us to our first night at the Rivertrees Country Inn. A beautiful resort where we could start our holiday in peace. We booked the ‘coffee plantation tour’ on Sunday, which immediately gave a good idea about life in a small village in Tanzania where, with few resources and using everything nature has to offer, coffee (beans) grow, process and be burned. 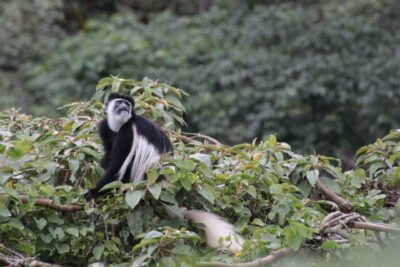 On Monday our guide John picked us up for our first game drive in Arusha National Park where we also had a canoe safari. John was a fantastic guide, knew an incredible amount about the animals we saw, spotted the animals left and right as he guided the jeep over the dirt roads with potholes and above all was a very nice guy with whom we chatted and laughed a lot. To start with, we were given instructions on how to use water (a metal bottle that can be refilled in the jeep), how to handle waste (you don’t leave anything behind), how to use materials sustainably and how to treat the animals with respect. 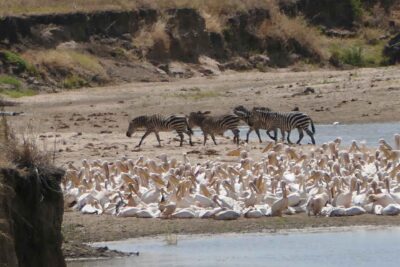 Upon entering Arusha NP there was immediately a giraffe on the road and we saw the rare black and white Colobus monkeys. While canoeing, the giraffes came to drink, we saw flamingos and beautiful cranes. Also a python sleeping on a rock where an American (how do you) thought it was a good idea to wake it up, the snake jumped away, luckily in the water and not in his canoe.

The next day we left for Tarangire National Park where we immediately saw 4 lions hunting and sneaking past 10 meters from our jeep, unfortunately for them the impalas and zebras had their eye on them. During the game drives we saw a lot of elephants especially the little ones were cute. Also a cheetah with her prey along the road, delicious while we watched. 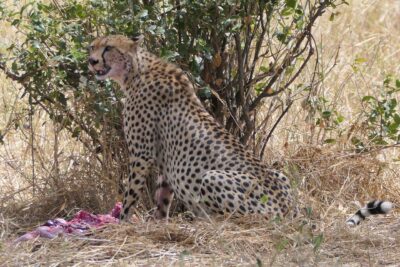 We had 2 nights in Tarangire Safari Lodge where you had a beautiful view over the savannah, saw the animals walking by and in the evening heard the elephants grazing and lions roar. In the dark we were neatly brought to our tent by the guards. It was surreal to see the sun rise from the terrace in the morning and we had that feeling almost every day.
We had the very best experience at the Lake Manyara Wayo Green Camp, an eco-camp, completely at one with nature but with a cuisine worthy of ‘stars’. It was Anniek’s birthday and in addition to the bubbles, the camp team led by ‘Hippo’ had done a great job with singing and dancing, and cake with dessert. A birthday you will never forget. 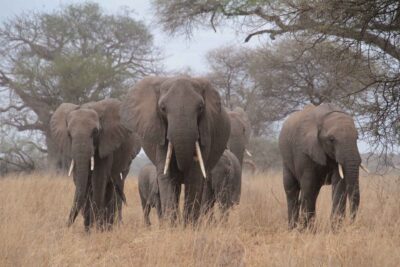 While eating, about 26 elephants and a leopard came to drink at the waterfall, we were surrounded by 6 lions, unbelievable. In Lake Manyare we had a night safari where the lions lay on the road in front of the car and a walking safari where we walked right past a group of hippos sunbathing on the beach, but all under the safe supervision of John and an (armed) ranger .

Then on to Rhotia Valley Tented Camp but first a local lunch in Mto Wa Mbu. In Rhotia we had a rest day, also nice after so many impressions, after which we left the next morning at half past six for the Ngorongoro Crater… cold and foggy. Fortunately it cleared up in the crater and we saw a lot of animals again. 20% of income in Rhotia Valley Camp goes to the adjacent orphanage, older children from the orphanage also work and receive an education and work. There was a nice casual atmosphere with all the friendliness we always saw in Tanzania. 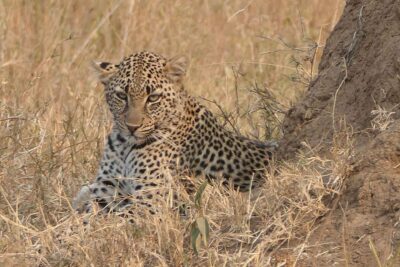 Our last leg went to the Serengeti, here again lions (we were able to capture a ‘kill’ of a gazelle on video), leopards (one had a gazelle in the tree), elephants, buffalo, giraffes, jackals, hyenas , zebras and a lot of wildebeest. But first about the Pembezoni Camp where we were the only guests and they only had 6 tents. The semi-permanent camp was one with nature, completely sustainable and furnished with attributes of tribes from the Serengeti. At the campfire Julius, from the bushmen tribe, told about the habits of his tribe, how they live and hunt (only males) with only things that nature has to offer them and how they make sure that everything is used. Here too we were spoiled again and when guiding us to the tent, a buffalo was watching us 50 meters away. Unfortunately we were only there 1 night but it was a special experience. 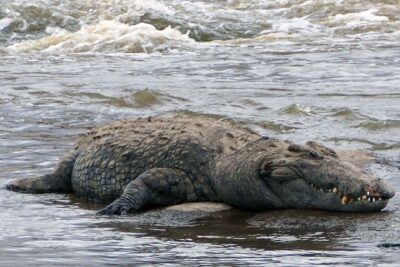 The last camp, Green Camp Kogatende, was in northern Serengeti to watch the migration. Unbelievable the elongated herd of wildebeest everywhere you look, all heading for the Mara river and then gathering and looking for a good place to cross without being eaten by the crocodiles. A wonderful end to our safari which also meant that we had to say goodbye to John. After many thanks back and forth and the promise that we will come back, we flew to Mafia Island to recover from all the impressions. 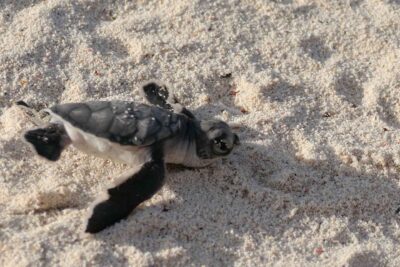 On Mafia Island we stayed at the Pole Pole Resort, again small-scale with wonderfully friendly people and a fantastic restaurant. Since all four of us have our diving license, we started exploring the underwater world with the Mafia Island Divers team. It was also fantastic underwater, including stingrays, napoleon fish, moray eels, barracuda and whole schools of colorful tropical fish. On our last day there was a turtle egg hatching which means that the eggs laid 45 days before hatch and all the little turtles find their way to the sea. This is so beautiful and emotional, over a hundred little turtles tumbling over each other on their way to the ocean. 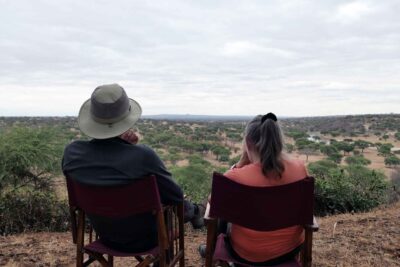 Then our trip was over, a fantastic experience that will certainly be continued in the future. Everything went according to plan.

Our thanks to the Explore Tanzania team and our fantastic guide John.