Three ladies on a mountain

What started as a crazy adventure years ago (we didn’t really know what we were getting into ;-)) became a journey to remember: we would try to conquer Kilimanjaro. We: that’s Els, Els and Greet, 3 active women aged 40+, yes even 50+ for two of us.
After a year of delay due to a virus that we are not naming, we decided to take a chance this year. And how glad we are that we did!

On September 17, we started the Machame route, hoping to get to the top of all three but still with a little heart.
Our two guides took us in tow alternately: Frank and Ilieser were like ying and yang, one boisterous and enthusiastic, the other calm and composed. Without hesitation, we followed all their recommendations (our husbands back home wouldn’t have believed it ;-)). After all, we were newcomers to the mountain. They were so happy to reconnect with ‘their’ mountain after more than a year. And to be able to exchange news (good and sometimes less good news) with fellow guides and porters along the way. For many of them, too, it had been a long time since they looked Kili in the eye. 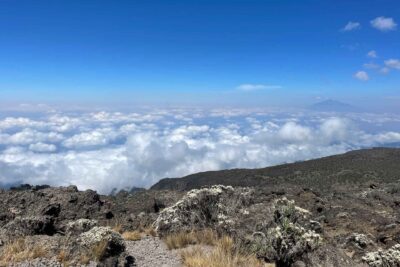 Surrounded by beautiful nature, we were in no time (after about six hours of walking) in our first camp: everything was ready there. Deep respect for the porters who rushed past us along the way: Jambo here, Mambo there. We even learned a few words of Swahili.
Washi Washi became the keyword for a cat wash with a tub of water. The chemical toilet that the ‘helicopter pilot’ (that’s what the carrier of the toilet is called) dragged along was an unprecedented luxury.
The delicious food ensured that we didn’t have to make any effort to stuff ourselves, because that’s the intention! Energy for now and later. One of the two guides also closely monitored this: ‘first focus on food, than we talk’.
Day 2: the better climbing and clambering, because ‘path’ is really a euphemism to describe the trail. But hey, it worked, without much effort, without muscle pain. And before we knew it we were already at 3700 meters.
Day 3 was announced as a tough day, and important for acclimatization: we climbed to 4700 meters, where, to our surprise, the cook with tent and all, was waiting for us with another delicious hot lunch. Afterwards it was blown back to a camp at 3750m. This was a really tough day with over 8 hours of hiking.
Day 4 Baranco wall was waiting for us: impressive! At its narrowest: kissing the wall: wrap your arms around the rocks and carefully step past them. The view upstairs was phenomenal. All in all a peaceful walking day. The symptoms of altitude sickness that we were apprehensive about, almost completely disappeared: hardly a headache, no nausea, at most a little less appetite, but our guides knew how to deal with that: keep cramming! Would we still succeed? Our saturation was measured and it was good, even very good. 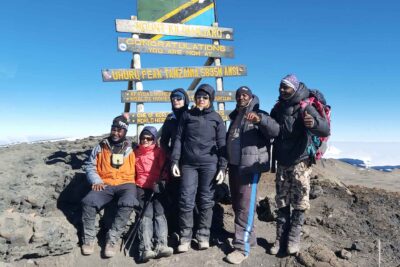 Day 5: short walk to base camp and especially a lot of rest to start the night climb at night… Could we put a pinnacle point behind our crazy adventure? The weather was favourable: hardly any wind, ‘soft’ temperatures, dry. ‘The mountain respects you’, Frank said.
Our two guides decided to bring a support: each of us got a personal guide. An unprecedented luxury, but one that ensured that all three of us reached Uhuru peak. No effort was too much for them. From that night we remember that we walked, climbed, swooned endlessly. Each for himself, each his struggle, to keep putting one foot in front of the other. Don’t think, just do. It was all worth it as the view at the top was phenomenal. Although we only really realized that when we were well and truly back down. We did it! Exhausted we fell into each other’s arms, we never did anything more difficult than this (there was nothing wrong with giving birth).

Thanks to Explore Tanzania and the local partner Tro-Peak adventures, three of us stood proudly on top of Mount Kilimanjaro, the mountain that provides an income for so many Tanzanian families. We are glad we went for it, it was magical, it was tough and still doable. A memory that we will share for the rest of our lives. 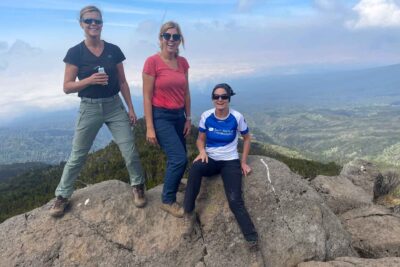