A constant onshore wind and a nice temperature create the perfect conditions!

Kitesurfing is very popular on the east coast of Zanzibar. Together with the friendly locals and the beautiful white sandy beaches, lined with palm trees, this is wonderful kitesurfing.
Perfect for beginners in the shallow coastal lagoons, and the experts on the higher waves behind the reef! 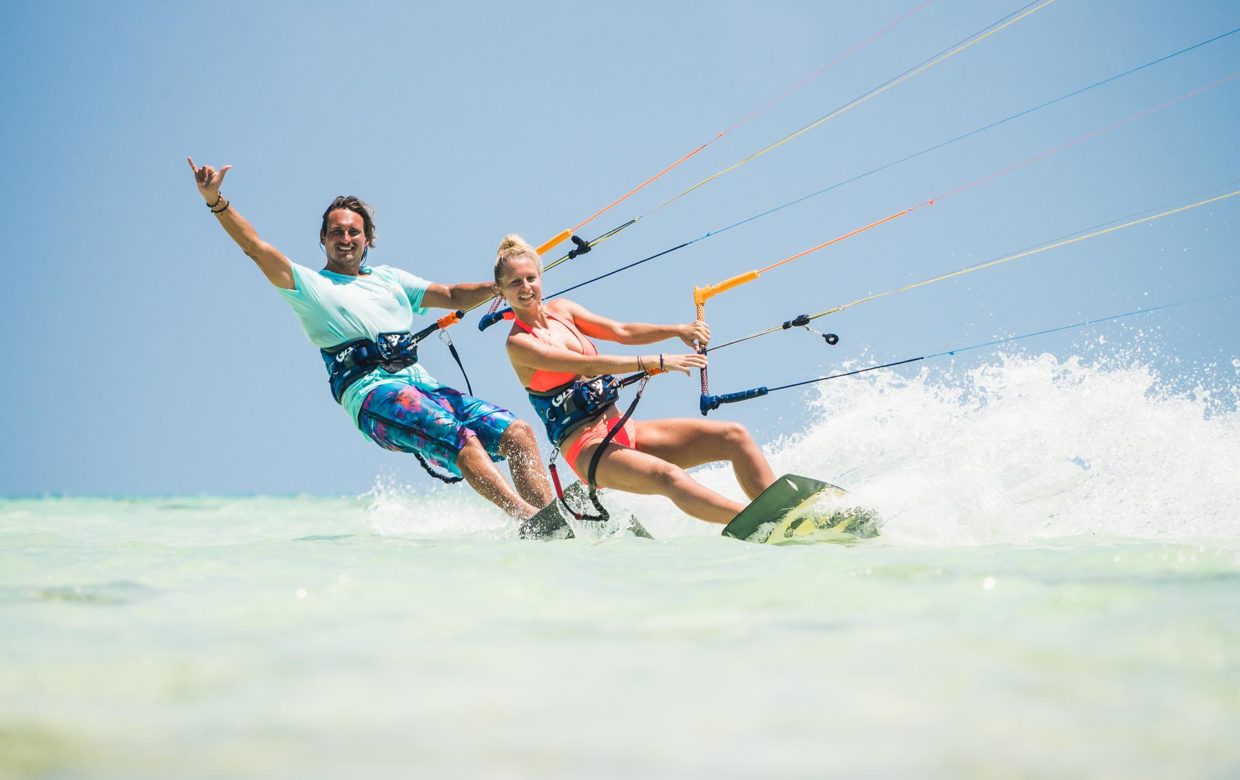 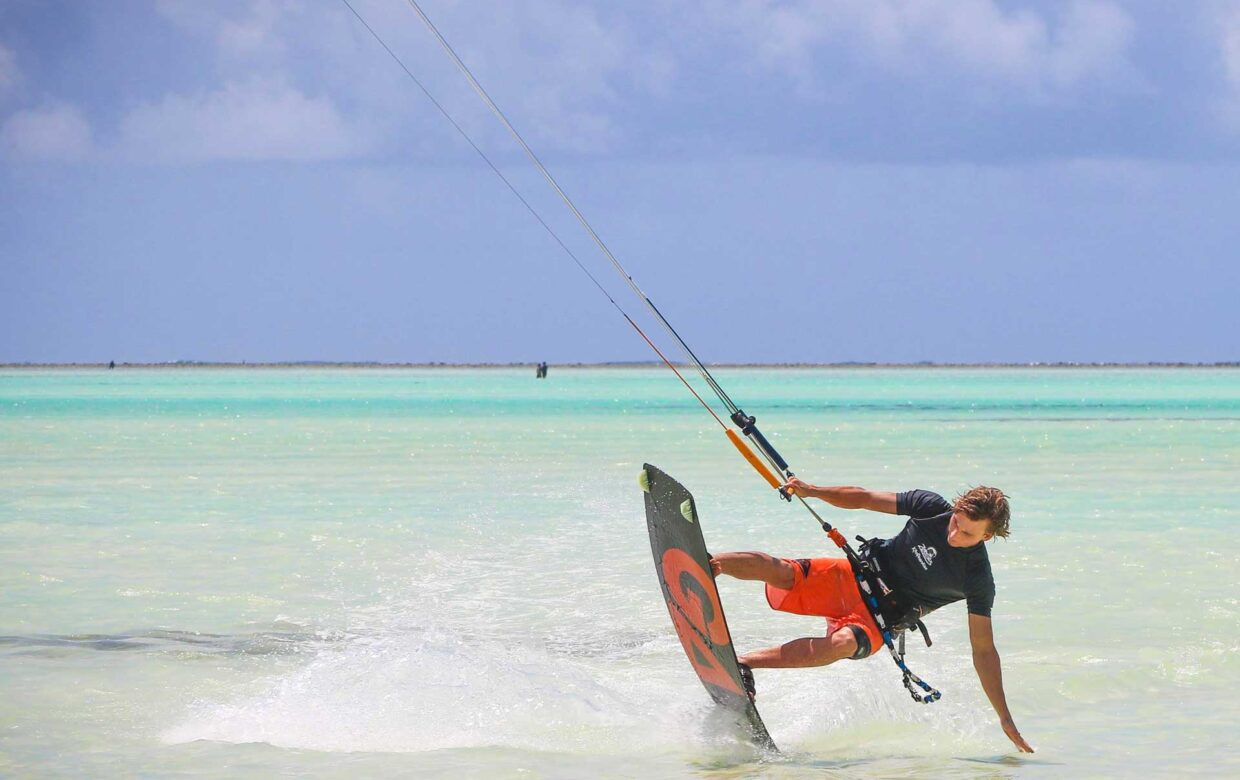 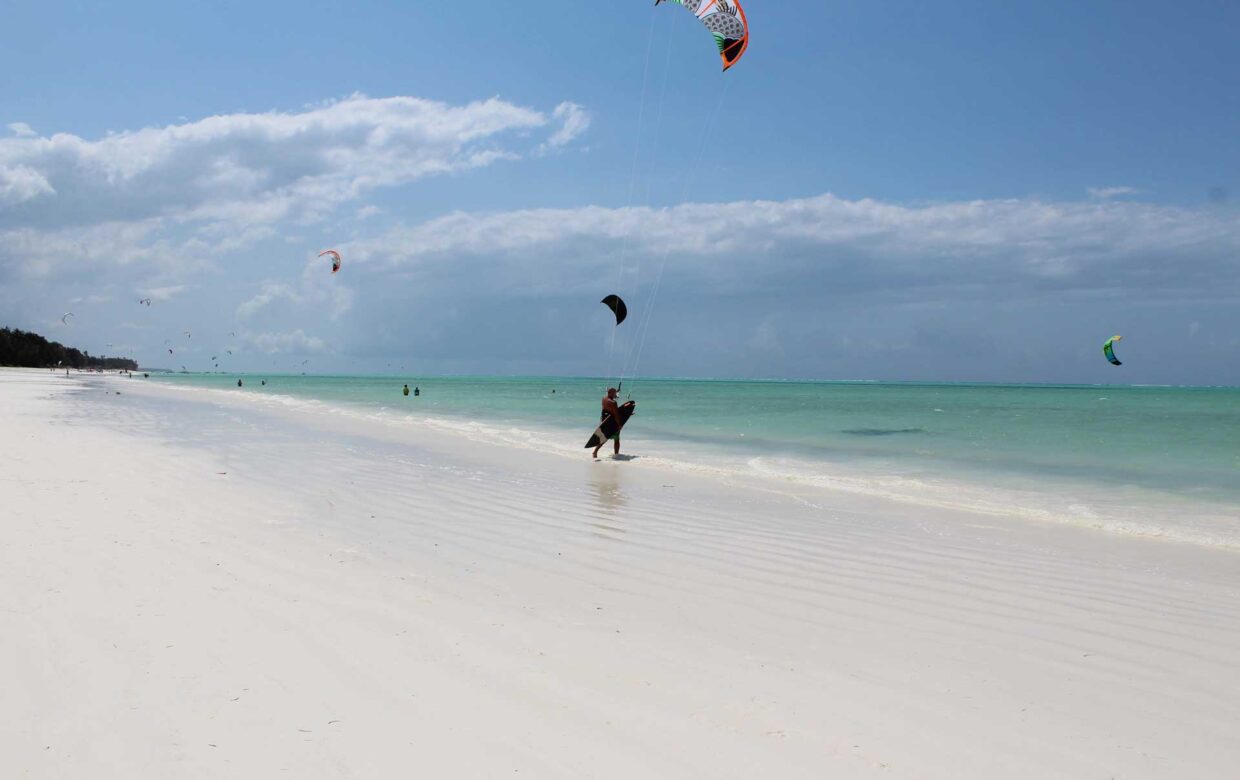 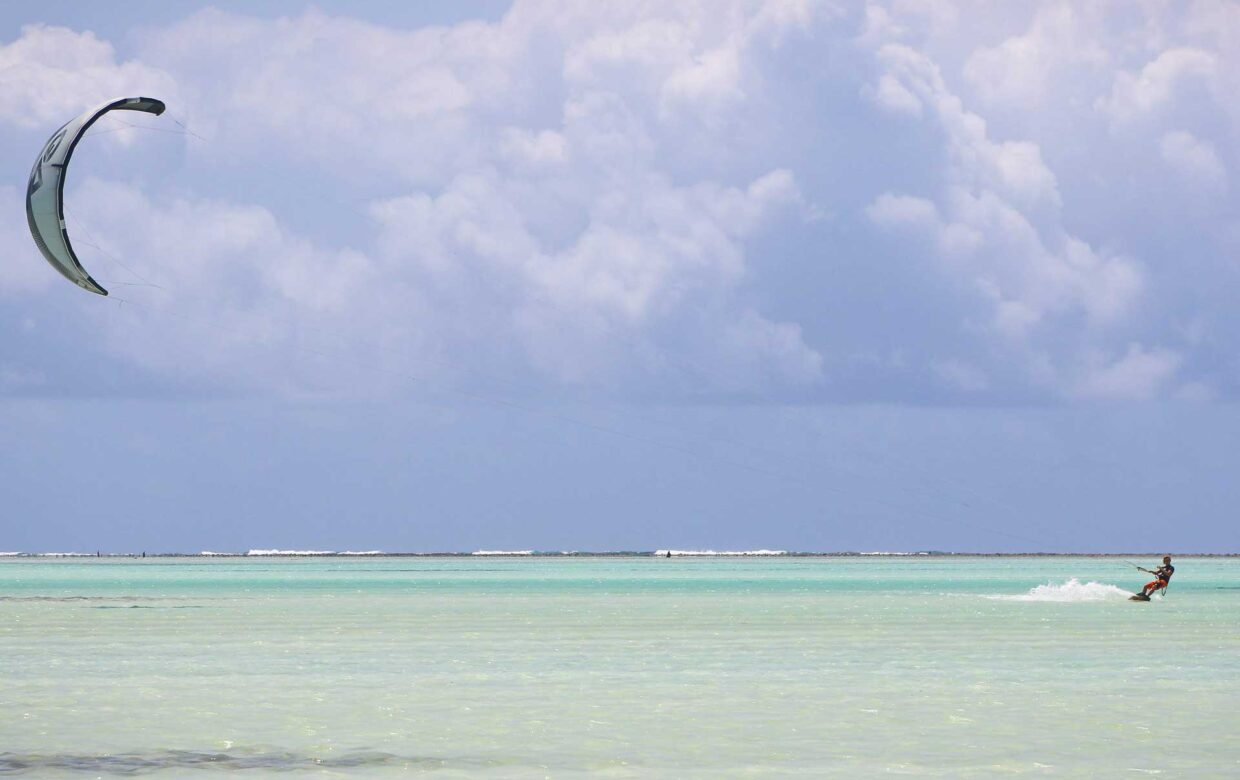 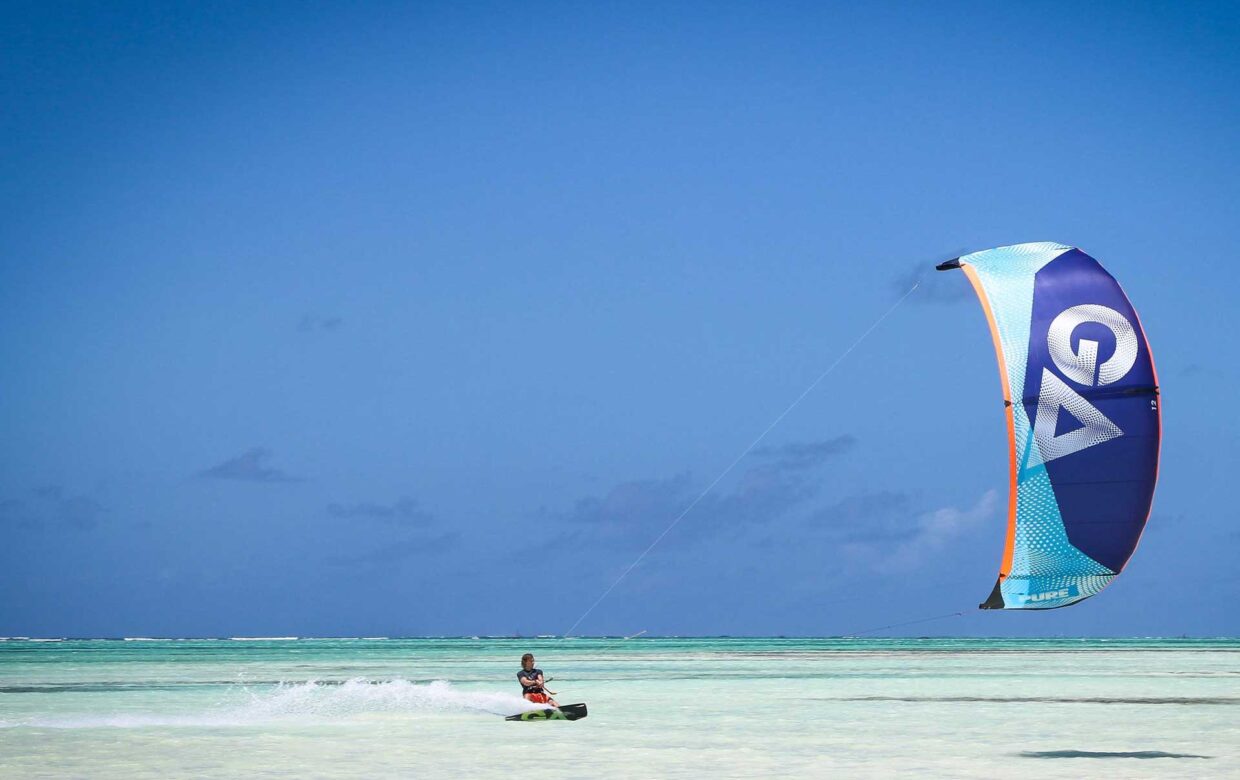 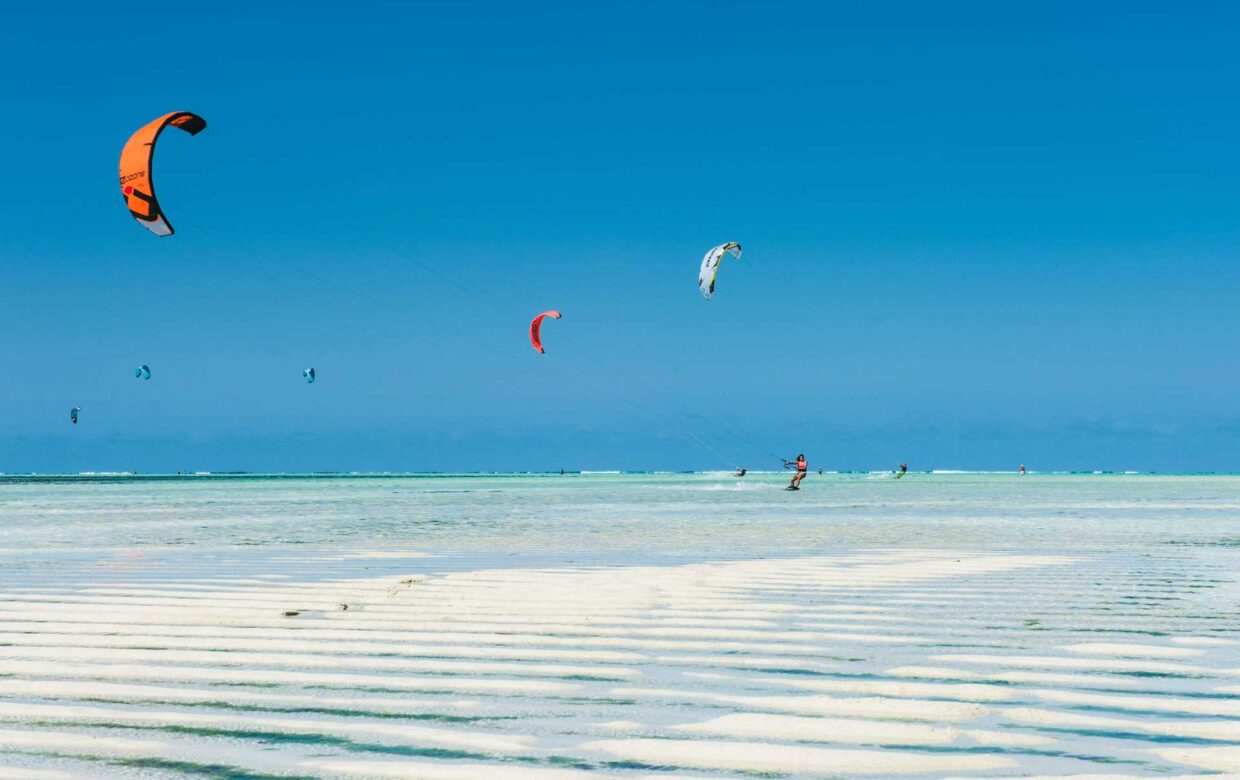 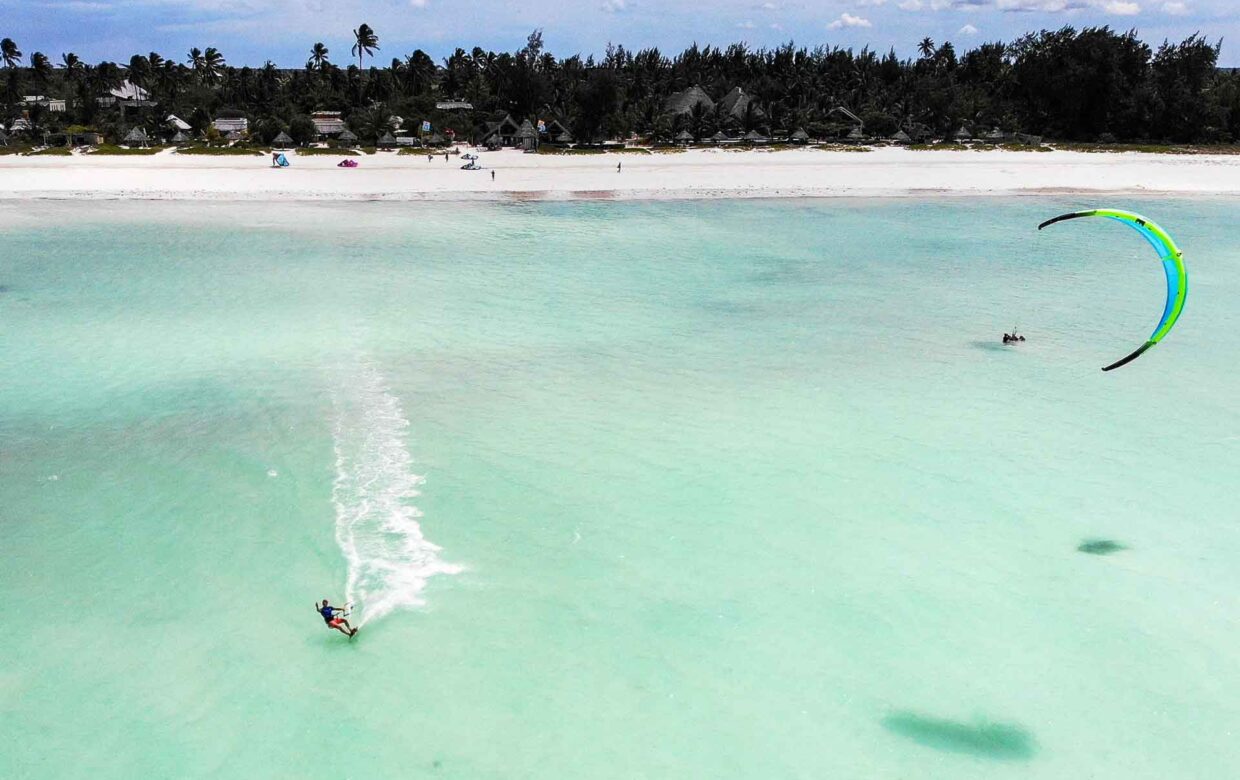 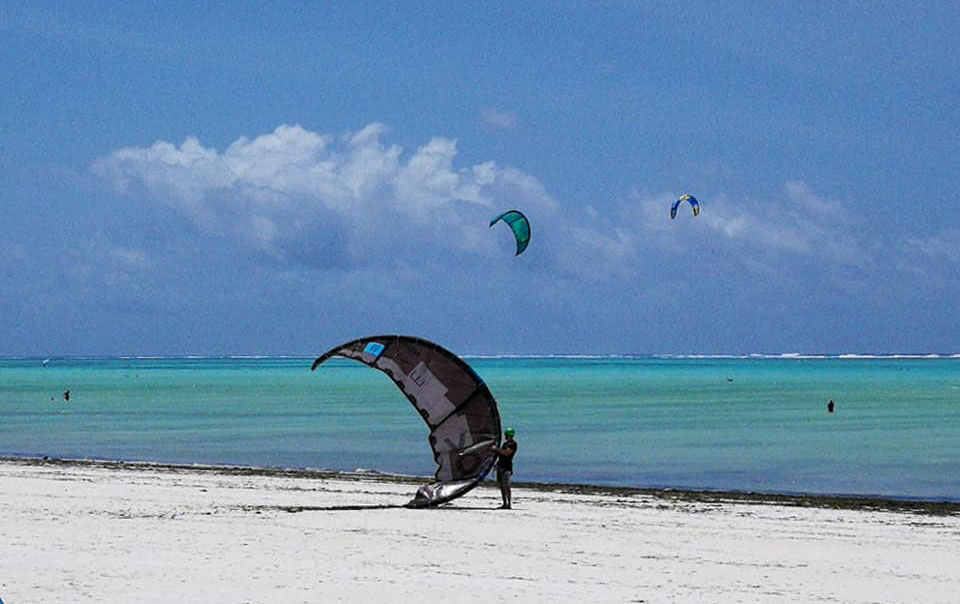 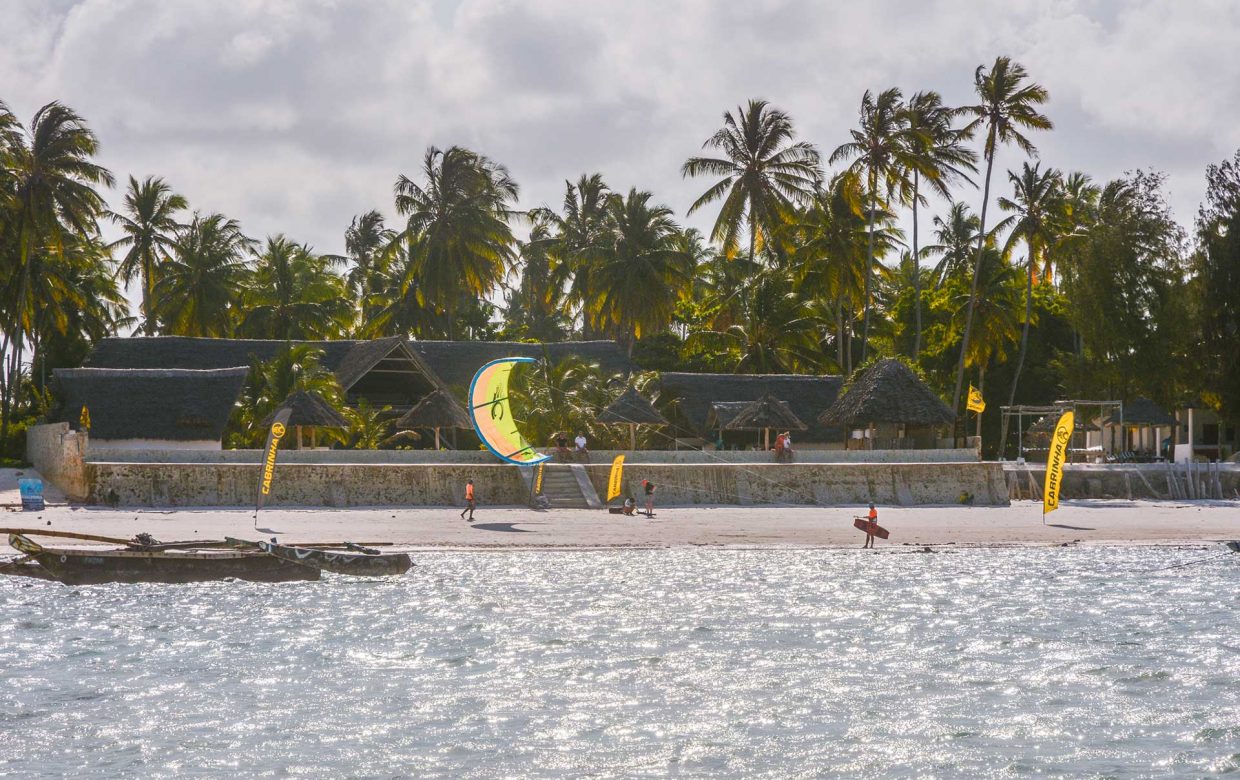 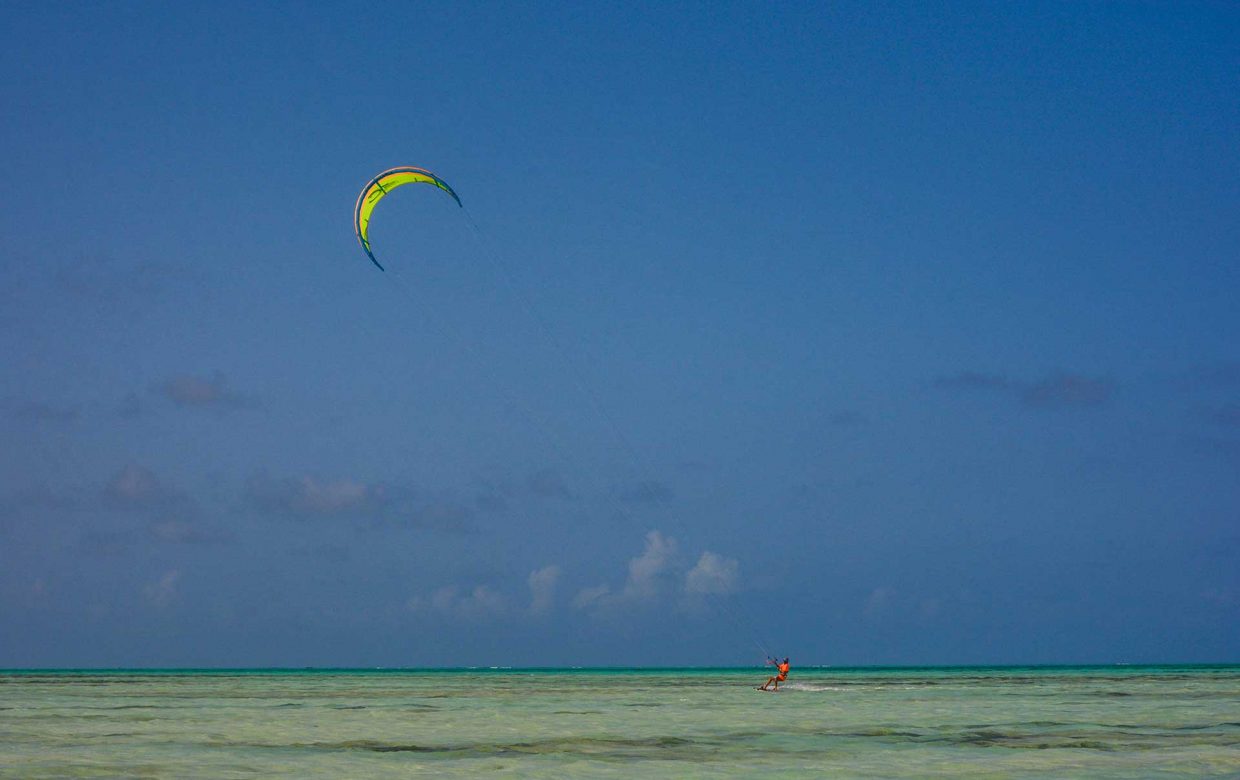 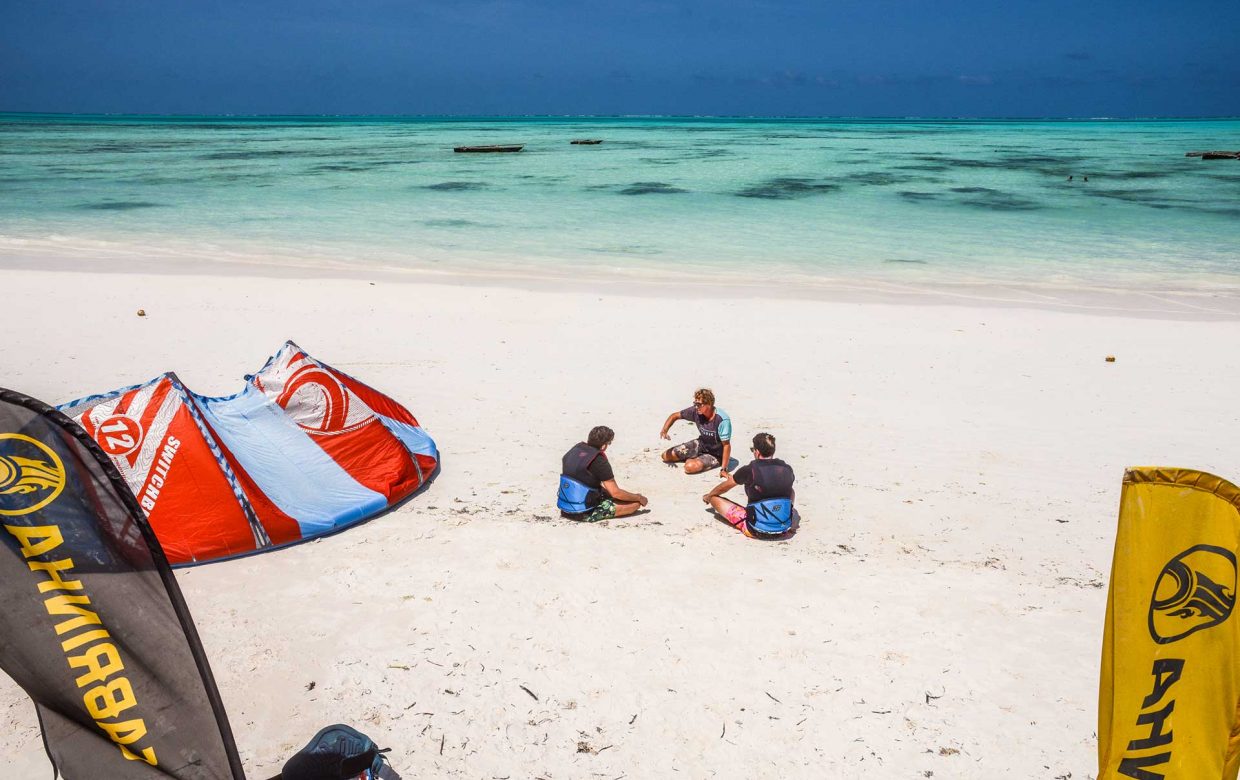 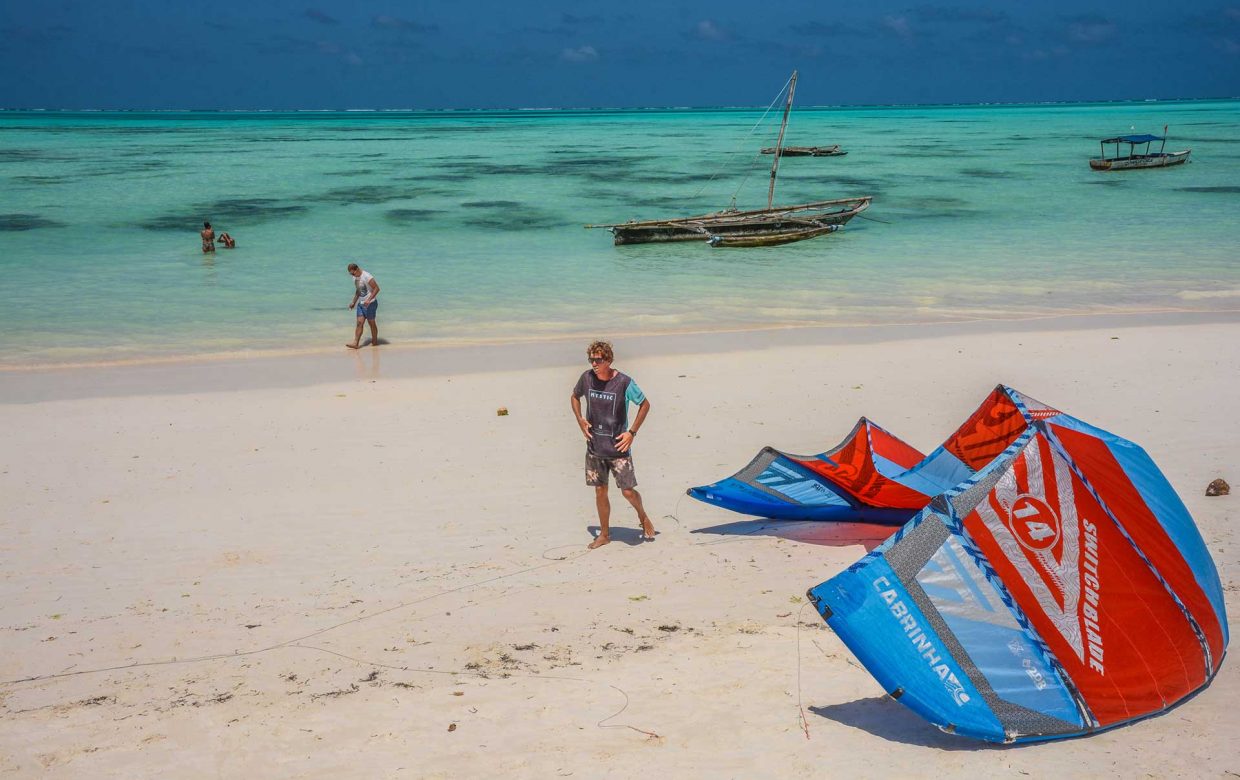 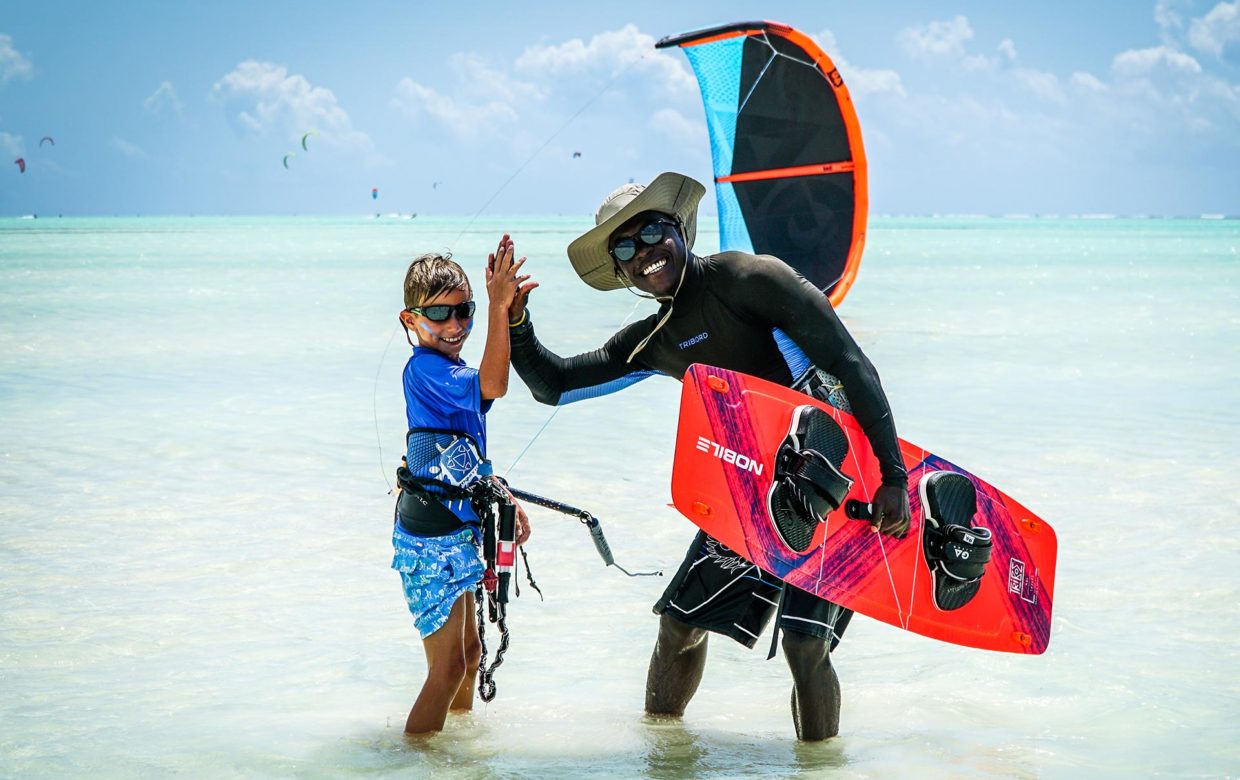 There are several options for fantastic kitesurfing on Zanzibar.

The beautiful white sand beach and shallow water have turned Paje from a fishing village into a lively seaside resort, very popular as a kite surfing destination.

It is one of Africa’s best kite surfing spots, for both beginners and advanced surfers. The constant onshore wind, the warm water, but also the shallow lagoon to the reef make Paje an ideal kitesurfing destination for beginners. Advanced skiers can indulge themselves on the high waves behind the reef.

There are several surf schools and equipment can be rented.

Jambiani is a half hour walk south of Paje on the east coast of Zanzibar. The village – a sun-drenched collection of houses and palm trees – stretches for several kilometers along a beautiful coastline. The conditions are comparable, a lovely wind and perfect water. But also a picturesque setting with the dhows and the boats in the sand.

Also in Jambiani are kite surfing schools and rental options.

For example, you can stay at Jambiani Villas or the sporty The Loop Beach Resort, the trendy New Teddies on the Beach, Blue Reef sport & fishing Lodge, the trendy Nur Beach Resort or the small and cozy Red Monkey Lodge.

Slightly further north on the east coast of Zanzibar is Pwani Mchangani. Not such a busy kitesurfing scene, but with similar conditions. So if you want it a bit quieter …

Here you can, for example, stay at Hodi Hodi Zanzibar or the slightly more luxurious Next Paradise Boutique Resort.

The average air temperature on the east coast of Zanzibar is 27 degrees from May to November and 29 degrees during the day from December to April. At night it is a degree less warm. Note, an average also has outliers.

The average sea temperature on the east coast of Zanzibar is between 26 and 29 degrees, with the water being the warmest in September and October (29 degrees) and the least warm in February / March (26 degrees).

The wind direction from December to March is mainly north or west / northwest and from April to November (east) northeast.

On the east coast of Zanzibar, a constant wind blows between wind force 2 and 5. Of course you also have some highlights here. From April / May (force 2) the wind increases to force 4/5 in August, and then again from November (force 3/4) to January (force 4/5), in a nice annual wave movement.

From December to March, when the Kaskazi winds are mild in the morning and moderate in the afternoon. Excellent for beginners as well as experienced surfers.

And from June to September, when the Kuzi wind blows, moderate in the morning and quite strong in the afternoon. Popular with the more experienced kite surfers from all over the world.

Do you also want to kite surf on Zanzibar?

Let us know and we will add this activity to your trip!